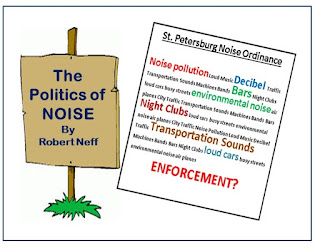 Remember to ask your City Council Member and candidate what their position is on our quality of life, especially as it relates to noise!

Mayor Rick Kriseman has focused on his pet projects and not improved residents' quality of life. Noise continues to be an issue for downtown and in South St. Pete and Skyway Marina District. National Institute of Health and researchers have published articles on noise's negative health impact for both adult and children, particularly with low frequency noise. Yet, under Mayor Kriseman's leadership, the St. Petersburg Police Department has not cited a business since Kriseman's first day in office from 2009 to June 30, 2017. 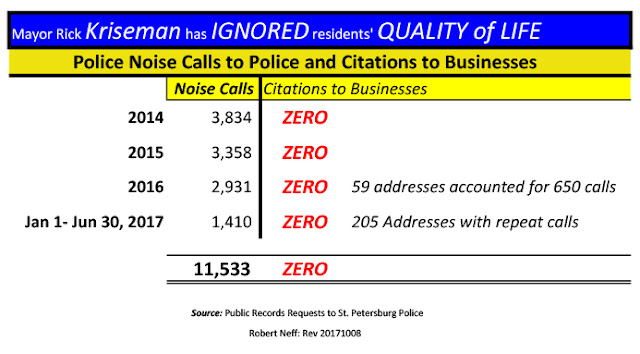 Here are two mind-boggling data points. There have only been three individuals and residents cited for noise violation from 2014-June 30, 2017. Businesses have sued three residents for calling the police

What Mayor Kriseman and any Council Members needs to ask themselves is, Why have we put our residents in a position to be sued? How many resident can afford an attorney? How many have the time and skillset to research the issue and fight a lawsuit? Not many residents have the necessary skillset. Mayor Kriseman and City Council's inaction have applied a chilling effect on a resident's right to call the police.

On May 18, 2017, the City received the results of an acoustical (noise) study by an acoustic engineer.The study's scope was Downtown Jannus Landing Block and along Beach Drive through Vinoy Park. The main observation was:


In general, nearly all venues exceeded 90 dBC and multiple venues were well in excess of 85 dBA and 100 dBC at the property lines (commonly used to assess compliance with a decibel based noise ordinance) and were often plainly audible at distance of several hundred feet or more.

The noise was worse than expected! According to the FAA, maximum day-night average sound level of 65 dB is incompatible with residential communities.

As the city grows, businesses will encroach upon neighborhoods. The bars and restaurants bring will noise. The bars also bring crime. My research shows that bars and clubs have 2 to 7 times as many crime and police calls as noise calls.

Mayor Rick Kriseman is very much aware of the data and research. So is the Police Department and Chief Holloway. Kriseman could have demonstrated leadership and ordered the police to enforce the noise ordinance, yet he did nothing.  By not enforcing the noise calls, Mayor Kriseman is wasting resident tax dollars. If the police enforced the noise ordinance, this would reduce the noise calls, and allow the Police to focus on other issues.

Mayor Kriseman and City Council have demonstrated that businesses need to be protected over residents' quality of life. However, businesses do not have the same rights as residents. When I reported the noise from a local resort in the Skyway Marina District—mostly on Sunday afternoons, and after 11 PM—Mayor Kriseman, through his Executive Assistant, did inject himself into the noise conversation in an email to St. Petersburg Police's Acting Assistant Police Chief Kovacsev. But only to apologize for me wasting his officer's time.

NOISE: This has become a significant issue, especially downtown, where many new residents continue to have concerns about the increasing level of noise. We will enforce the existing (or any new) noise ordinance, something the current mayor has not done, including taking appropriate legal action when necessary against repeat violators.

On Monday, October 10, I attended a Meet-n-Greet with former Mayor Baker at Leslie Curran's ARTicles on Central Avenue. Mayor Baker was relaxed and approachable. Baker listened as I shared my research, other residents's stories, and how noise impacts our health. Baker broke this down into two simple comments, (1) Resident's quality of life is very important, and (2) The noise ordinance will be enforced.

So, when you vote for St. Petersburg's next Mayor, ask yourself, do I want Mayor Kriseman who does not listen to residents and apologizes on your behalf? Or do I want former Mayor Baker who respects resident's quality of life, listens and has a neighborhood plan, and jobs and economic blueprint? I chose former Mayor Baker to be St. Petersburg's next Mayor.

Remember to ask your City Council Member and candidate what their position is on our quality of life, especially as it relates to noise!