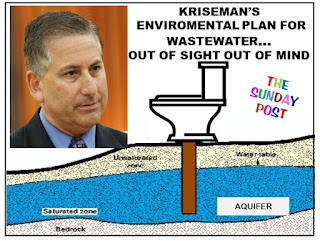 Does the Kriseman Administration see Florida’s aquifer as a toilet to flush the City’s waste into?

Kriseman indicated he “did not know until recently” that the partially treated sewage had been flushed into Florida’s aquifer. No definition of recently.

YOU BE THE JUDGE: Bill Logan, the PR person hired for our Water Resources Department issued a statement that included the following:

"Hurricane Irma brought even more rain in September, and even though the system was pushed again, there were no major issues."

While there were not discharges into the bay, we did discharge 20 million gallons of less than full treated water into our injection wells, on 9-11-2017. This is a violation of FDEP regulations and requires a report to be filed with the Florida Department of Environmental Protection.

I'll let you be the judge of whether or not these were "major issues" and in all fairness it did happen during a hurricane. I just want you to have full and complete information.

Kornell also said, "I understand that during a hurricane, these kinds of things can happen. But we should always be completely and 100 percent honest with the public," he said Wednesday. "Saying there were no major problems and then having this one and not telling people? I don't see why we continue to do that sort of thing. It's ludicrous."

Acting Water Resources Director John Palenchar stepped up like a good soldier and took the blame for not following the law and notifying the public saying, “We should have circled back and closed the loop on that, it’s my fault.

Once again, we see the complete lack of common sense in the Kriseman administration.

Somebody blew the whistle and Kriseman, and all his “spokespeople” got caught with their collective pants down.

This whole issue brings up an even bigger point.

The City is adding more injection wells at its wastewater treatment plants, and the public is at the complete whims of the administration as to what is pumped down them. Flip a couple of switches, turn a couple of valves and all that bad stuff just disappears.

Unless integrity and responsibility are demanded from the top (Mayor’s Office) all the way to the injection well the public as no assurance that any administrative staff member will do the right thing.

From the very outset of his administration, Kriseman has taken the alley cat approach to the integrity and responsibility of the Mayor’s office. From his questionable cronies to his lies, and failure to respect the public views and input, it seems obvious that he has created an atmosphere that encourages his subordinates to make their decisions in the Mayor’s interest in contrast to the public’s interest.

It is time to return integrity and common sense to City Hall. To have a leader who leads and motivates his administration to do what is right.