St. Petersburg Mayor Rick Kriseman and Police are not protecting residents in their homes 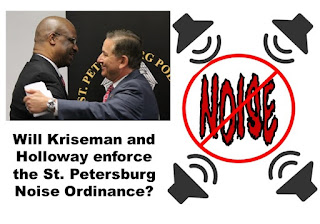 If Mayor Kriseman and Police Chief Holloway were concerned about resident's quality of life and the City's noise issue, they would have enforced the Noise Pollution Ordinance

St. Petersburg Mayor Rick Kriseman has ignored City's Noise Pollution Ordinance. The Mayor has supported St. Petersburg Police Department decision to not use the ordinance to stop business’s repeat violations. This is a waste of resident's taxes. As a result, multiple residents have been sued for calling the police. To defend themselves, one resident spent $6000 and another over $20,000 and is not finished.

If Mayor Kriseman and Police Chief Holloway were concerned about resident's quality of life and the City's noise issue, they would have enforced the Noise Pollution Ordinance. Since 2009, residents have called to report noise to the police over 29,000 times. Yet, you can count on your finger and toes the number of noise citations that have been issued to individuals and residents. No business has been issued a noise citation. Public Records Request were used to request the data.

Residents must be prepared when they complain to the police about a business and even a residence. The police may try convince you that you are the problem and how they don't want to cause a business to close. Be aware, Chief Holloway's Police Department is not concerned about your quality of life. You must document every call, every officer you spoke with, what they said, and make a public record request for report and audio of the call to dispatch.

First, you must be seen by the officer if you want there to be any chance for the officer to issue a citation. The police officer must witness the noise with you. At this time the officer will interpret the noise ordinance and decide to do nothing, warn the business or individual, or issue a citation. You must ask what his intention is. Ask if the officer is issuing a case number or incident report, ask for the Call ID,  and get the Case and Incident number.  Then make a Public Records Request for the Call For Service Report and Incident Report if the later as issued.

The Public Records request may be made online. You will be required to create an account.

The audio of the dispatch call is not kept past 90 days. You must immediately request this.

If the police officer files a Call For Service Report or an Incident Report, the facts may not be properly stated or distorted. You need to request any incident report and read it. If you believe the officer's comment are distorted, then you need to contact Chief Holloway and let him know. Regardless, the Police will not alter a report. There is no box for rebuttal!

Our City leadership has created a hostile environment for residents and this has led to negative police sentiment. When it comes to the Noise Pollution Ordinance and past behavior, Mayor Kriseman and Chief Holloway's Police Department seem to have no problem walking all over your civil rights.

When businesses use lawsuits to stifle resident's voices, this can be a violation of Florida Statute 768.295 Strategic Lawsuits Against Public Participation (SLAPP) prohibited. The SLAPP statute states:

(1) It is the intent of the Legislature to protect the right in Florida to exercise the rights of free speech in connection with public issues, and the rights to peacefully assemble, instruct representatives, and petition for redress of grievances before the various governmental entities of this state as protected by the First Amendment to the United States Constitution and s. 5, Art. I of the State Constitution.

When a business files a lawsuit against a resident for calling the police, you need to ask your attorney about filing an Anti-SLAPP Motion to stop the business from chilling your voice. This may be a resident's only defense, not Mayor Kriseman, who will support Chief Holloway and his police department.

While some on City Council support the revision to the Noise Pollution Ordinance that is underway, some do not. Know where you Council Member stands. Use email to ask them, council@stpete.org.
The opinions here are the author's and do not necessarily reflect the views of Bay Post Internet or the Blog Publishers where it appears.