Police Chief Holloway is out of touch with St. Petersburg 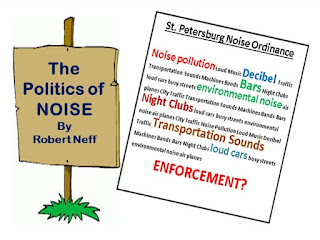 Recent comments by Police Chief Holloway in the St. Pete Chamber blog indicate that his leadership and staff are out of touch with the city’s noise issue. Mayor Kriseman has been rubber stamping the Police Department’s position, which is to not cite businesses, because they do not want to put them out of business. This rational is a broken policy and should prompt every resident, news station, and newspaper to call into question Mayor Kriseman and Chief Holloway’s leadership. Residents have a cause for concern that the police are not protecting our civil rights and not protecting us in our homes.


Chief Holloway and his Police Department have been able to fly under the RADAR because no one has questioned his department’s sloppy police work and mishandling of the City’s noise pollution issue. I have been on the front lines battling the police department’s refusal to cite a business for repeat noise calls since 2014. I have organized with other residents and neighborhoods to pressure Mayor Kriseman and City Council into strengthening the Noise Pollution Ordinance. While  Palm Harbor and Bradenton Beach have strengthened their noise ordinances to help residents, the City of St. Petersburg has been inventing excuse not to enforce it. 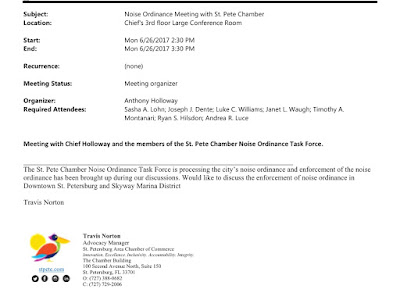 
“Chamber members met with the St. Petersburg Police Department (SPPD) to discuss the enforcement of St. Petersburg’s noise ordinances. The meeting revealed that, contrary to recent claims, citations for noise violations have been issued. Some of the confusion about citations may stem from the citation issuance process; rather than being issued to the violating business, citations are issued to highest-level employee that is present at the business when the violation occurs.”

I disagree with the Police Chief Holloway’s statement that violations have been issued. I have conducted Public Records Requests from 2009-2016 and from January 1 to June 30, 2017 and found no citations to businesses. The data obtained via a public records requests cannot corroborate his claim. From 2009 to 2016, the citations have been for unlawful motor noise and traffic safety. Chief Holloway must explain his statement. Mayor Kriseman and City Council should demand Chief Holloway produce his data to defend the Police Department’s statement.

In 2016, there was only one (1) for UNLAWFUL OPERATION OF RADIO/SOUND-MAKING DEVICES OR INSTRUMENTS. On December 25, 2016 there were 17 noise nuisance calls and 3 ordinance violations for unknown causes. However, there was only one citation that day. I have requested the report for December 25 to verify business, residence or individual, but the intersection does not seem to have a business.

“SPPD is reluctant to utilize decibel meters. One consideration relevant to the adoption of these devices is that the credibility of decibel-meter readings in court relies in part on whether the equipment operator is a noise expert, as decibel readings can be affected by wind speed and direction, humidity and equipment calibration.”

The Police Department is making incorrect statements. They have no staff acoustic experts or legal expertise in this matter. The comment identifies only one type of noise, audible noise. The police fail to mention low frequency noise from 10-200 Hz, whose characteristics are much different than higher frequencies. Low frequency noise can turn corners, penetrate buildings, and cannot be dampened by new windows. The low frequency sound wave is powerful, can travel much longer distance than audible, and reflect off walls and building surfaces to redirect the low frequency noise.

The police make no mention of low frequency’s health impact.

“Excess noise awakens, angers and frustrates people. It disrupts communication, individual thoughts, and affects work performance. It can also pose serious health risks such as: (1) hearing loss, (2) stress, and (3) threats to mental and social well being."

The Mayor’s Noise Ordinance Revision intends to use decibel meters. The St. Pete Chamber supports decibel meters. The Police Department needs to defer to City Legal for an official City position on the use of decibel meters. A sound meter’s accuracy could be challenged if dB reading being used to determine a level sound for a frequency is outside the meter’s range. If the police are properly trained, then this should not be an issue.

My attorney has been defending me against a nightclub’s civil lawsuit for reporting noise since 2014, responded to this comment in the St. Pete Chamber article. The Chamber has not approved the comment. Why is the St. Pete Chamber blocking public response from a former City Legal Advisor who is extremely knowledgeable?

This spring, I met with members of the St. Pete Chamber of Commerce’s Noise Task Force. They were looking into the City’s revision of the City’s Noise Pollution Ordinance. I shared the data and issues I had experienced, especially the responding Police Officer’s open hostility toward me and the negative sentiment they have caused.

While the Chamber of Commerce supports the City’s need to revise the Noise Pollution Ordinance to use decibel meters, the St. Pete Chamber Noise Task Force is not asking the tough questions or conducting the research necessary to understand the issue. The Chamber has not challenged Chief Holloway's comments. The chamber has accepted Police Chief Holloway’s remarks despite being presented research that question Chief Holloway’s findings.

“When asked about St. Petersburg’s noise ordinance, Chief Holloway shared that that the SPPD does enforce it. Generally, officers focus on responding to complaints rather than actively looking for noise violations.”

From 2009 to June 30, 2017, there were over 29,000 calls. Yet, Police only issued 21 citations and none to businesses. The police have not conducted a serious data trend analysis on the data they readily have available at their fingertips. They have not identified businesses with repeat calls. The have not generated a heat map to see where the noise hot spots are and how many call were assigned to residences verses the business. I generated a 2016 heat map in an hour.


While the data easily shows the number and location of addresses with repeat calls, the City has not been using the data they readily have access to use. On June 2, 2015, Acting Assistant Police Chief stated in an email,


Repeated calls for service and observing violations will allow for the foundation of a valid noise nuisance. 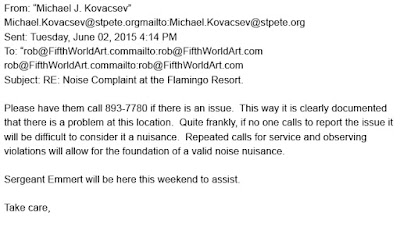 However, the police failed to identify the Flamingo Resort as a business with repeat noise calls. Why? The police were not effectively using the data they had and were not listening to the audio of the calls to dispatch. If they had, they would have heard multiple callers and how the noise impacted their health.

“This approach enables SPPD to focus on its highest-priority issues.”

Seems Chief Holloway doesn’t realize that businesses with noise complaints have 2 to 7 times as many crime calls as noise calls in St. Petersburg. For example, from 2009-2016, the one night club on City's Southwest side in the Skyway Marina District, the Flamingo Resort had 948 non-noise calls for crime, such as, death, suicides, overdoses, and theft.

If Chief Holloway’s Police Department were to focus on repeat callers and cite a residence or business for noise they could drastically reduce the the number of noise calls and focus on its highest-priority issues. This is why Chief Holloway’s refusal to enforce the Noise Pollution Ordinance is wasting resident’s taxes that could have been used for the city's sewage issue.

“With some businesses repeatedly showing themselves willing to accept the current noise-violation fine of $200, SPPD has been working with City Council to change St. Petersburg’s noise ordinance. The new ordinance will likely include provisions that could bar multiple offenders from operating at night for up to one year by revoking their extended-permitting privileges. Additionally, it will likely enable officers to issue citations to the owner of the establishment instead of the manager currently on duty, as is currently required. SPPD is also considering shifting noise-ordinance enforcement to civilians. This step could reduce average response time from 30 minutes to as little as five minutes and free officers to focus on higher-priority issues.”

In the 2nd Public Noise Meeting on March 28, 2017, Codes Compliance Assistance Director Robert Gerdes mentioned that he does not want parking enforcement enforcing noise. He does not want to put them at risk.

Police Chief Holloway is way off base asking for civilians to approach businesses and residents to tell them there is noise issue. Think about that for a moment. In today’s world, homeowners have firearms. Well over half of the calls are after dark. Walk up to a home after midnight or 3 AM and your risk to get hurt just increased. Now ask a civilian to respond to a call at a home and there is alcohol present or a party. Your risk just went through the roof!

The downtown calls from January 1 to June 30, 2017 show 53% of the calls are in violation. That means civilians would be responding mostly after 11 PM from Monday through Thursday and Midnight on Friday and Saturday.

Why doesn’t Chief Holloway and his Police Department understand how noise impacts resident’s quality of life when the health risk is well-documented?

Why hasn’t the Police Department hired noise expertise to train officers on the different types of noise? How to respond and handle calls? The Chief doesn’t live near a bar or club that generates noise and thumping inside your condo. The only conclusion I can reach from the data and my 3+ years working on this issue, is the police don’t want to handle noise complaints to both residents and businesses. But is there also a political reason?

Downtown residents have made the Police very aware of the issue. Don’t they understand that they are here to protect residents in their home? This boils down to sloppy police work and a failure of leadership by Mayor Rick Kriseman and Chief Holloway.

Where is the Tampa Bay Times on the noise issue? They seem only to be interested in Council's vote on the revision to the Noise Pollution Ordinance and not the issue. Why? This is a great opportunity to embrace the community. Instead, the Tampa Bay Times has proven how out of touch they are with residents.

Why does the St. Pete Chamber have a Noise Task Force if they’re going to play tiddlywinks? This is a real issue facing residents. We need the Chamber to use their resources to investigate the issue, do field work, and walk the streets and talk to residents who have issues with the noise.

As a matter of fact, Mayor Kriseman, Chief Holloway, St. Pete Chamber of Commerce and Tampa Bay Times need to meet with the residents who have called and be in their residence for the duration of the noise.

Mayor Kriseman, Chief Holloway, St. Pete Chamber of Commerce and Tampa Bay Times need to be reminded that the “The State has, within its police power, the right to protect the tranquility, quiet enjoyment, and well‐being of the community.” Kovacs v. Cooper, 336 U.S. 77, 69 S. Ct. 448, 451, 93 L. Ed.

Residents need the police to enforce the law and accurately report on the events, St. Pete Chamber to question the Police and City and work for both businesses and residents, and the Tampa Bay Times to report from the field and check the data they get from the City. They all should be protecting residents so they do not need to defend themselves against a lawsuit because police are not doing their job!