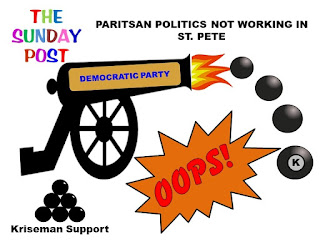 The Democratic Party is lobbing in money and a few mid power band names to try to prop up the slowly sinking Kriseman bid for reelection.

When Rick Baker announced his decision to run for St. Pete Mayor, he pointed out that partisan politics were all Rick Kriseman had to run on.

It turns out Baker was spot on

Kriseman has continued to try to tie Baker to Climate Change, everything Trump says and all thing's Republican.

It’s sort of difficult for St. Pete's citizens to grasp the mayor’s impact on climate change, and the tweets of the president when they are wading around in ankle deep sewage.

Add to that Kriseman’s penchant for St. Petersburg being a sanctuary City, a pier that most people didn’t want at a price they cannot afford, a mayor’s office with enough spokespeople to hold a board meeting, real fear of telling the truth, and the Democratic party may want to think twice about wrapping themselves up in the Kriseman blanket.

The Democratic Party is lobbing in money and a few mid power band names to try to prop up the slowly sinking Kriseman bid for reelection. So far, the effort is falling short.

Unlike Kriseman, who is bitterly partisan, Baker works easily with members of both parties and looks for quality and performance in people rather than Party affiliation.

Kriseman has done more to politicize the Mayor’s office and the St. Pete government in general than all the strong mayors who proceeded him.

St. Petersburg needs a Mayor, who is willing to let the Governor run the State; the President run the Country and focuses on public safety, quality of education, job opportunities, poverty and the quality of live for those who live in St. Petersburg.

Looking at his growing list of supporters and endorsements that person would be Rick Baker.