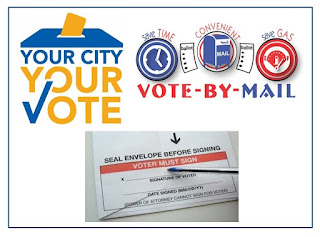 A Serious Conversation with Rick Kriseman Part I 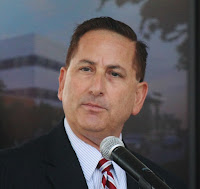 Rick and I sat down this past week(January 2013) at the Kahwa Coffee Shop south for some great coffee and a casual conversation.

Like most of the people seriously considering a run for the St. Mayors’ spot, Rick Kriseman is fully aware of the City’s problems and opportunities.

For someone who just finished a six-year stint in Tallahassee Rick looks great. Currently practicing law at Lucas, Green and Magazine in Clearwater, Rick gets into political mode quick.

His answer to my first question: "Where do you think the City is," was quick and decisive.
"I don’t know where we are going. It’s like a car stuck in neutral," Rick said.

“What do you see as major issues," I asked?
“Beyond the Pier and the Rays, I think the age of City staff is a critical issue." "I am concerned about the ongoing decline in institutional knowledge and the lack of a transition plan," Rick responded.

Kriseman has done little to address this problem in his first four years.

“Are you ready to be the CEO of a nearly 500 million dollar a year business" I asked?
"Absolutely,” Rick Replied!

So far Kriseman has managed to run up the cost of almost every major project his team is managing. Moral is slipping to a new low and the transparency and credibility of the office of the Mayor is seriously in the toilet.

"How would you govern differently than the current administration," I asked?

“The best leaders are those who recognize their shortcomings and surround themselves with people who compensate for those short comings," Rick replied. 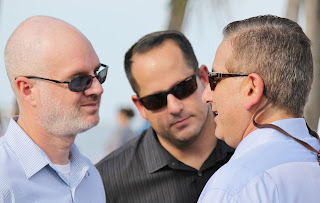 Here, in my view, is one of Kriseman's biggest failures. Instead of surrounding himself with people who compensate for his shortcomings, Kriseman immediately surrounded himself with his political cronies. The high-priced Office of the Mayor has been a serious source of frustration for the City staff and a major impediment to progress as everything is seen through a political lens.
"I would govern differently by offering a clear vision for the future, by being bold and proposing initiatives that move St. Pete forward, by solving problems instead of kicking the can down the road." 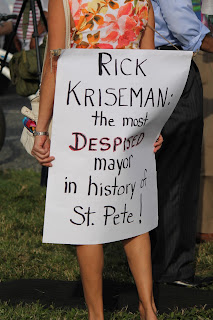 Kriseman’s view of the future is anything but clear. Don’t think so? Ask the Rays, the Pinellas County Commissioners and the leadership of Midtown and South St. Pete.
As for as clear vision goes, Kriseman now has two spin doctors one in his office and one at Water Resources to shape what you hear and see. Clarity it seems is far less important than political correctness.
As we will see in the next few questions, Kriseman had a good overview of the City's problems but he completely ignored the infrastructure issue until the sewage dumps into Tampa Bay.

In Part Two of this Post Kriseman talks about his frustration with Tallahassee,  how he would do things differently than the Foster administration, and crime in South St. Pete.
If you are following the St. Pete Mayor's race, you might find the following Posts interesting: A Casual Conversation with Rick Baker, A Casual Conversation with Herb Polson, Is Rick Baker Really Out of The Mayor's Race .
E-mail Doc at mail to: dr.gwebb@yahoo.com or send me a Facebook (E. Eugene Webb) Friend request. Please comment below, be sure to Like or share on Facebook and follow me on TWITTER  @DOC ON THE BAY.
See Doc's Photo Gallery at Bay Post Photos.