Morgan, Money, Marijuana and the mess created by the Florida Legislature. 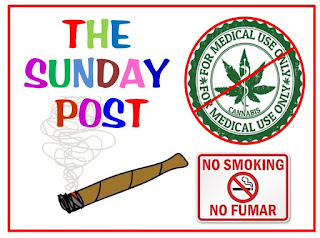 I signed both petitions for legalizing medical marijuana, and voted YES in both elections.

In the interest of full disclosure, my wife and I used the MORGAN AND MORGAN law firm to represent us in a small claim auto accident several years ago.
This week noted attorney John Morgan, the leading proponent of legalized medical marijuana filed suit against the State of Florida regarding the prohibition of smoking medical marijuana.

Details about the new law here by Michael Austin of the Times Herald, Lawmakers to vote (finally) this week on medical marijuana deal

From the Austin article, "Done is better than perfect and this is far from perfect," he(Morgan) wrote in a post on the website Medium. "I will be suing the state to allow smoke. It was part of my amendment."

I signed both petitions for legalizing medical marijuana, and voted YES in both elections.

What happened in Tallahassee in the Legislature is the classic example of why government is so ineffective. You would think that elected legislators would look at a referendum that passed with over 70% of the vote and implement it according to the law as passed.

Nope not in Florida.

The reasons are simple. The first one is money.

The second reason, I believe is a throwback to the infamous war on drugs. So successful was the propaganda campaign to criminalize marijuana and the resulting laws that everyone came to believe the uncompromising evils of a plant.

So much so that as a society we set about arresting, prosecuting and ruining the lives of literally thousands and thousands of people for the mere possession of marijuana.

The war on drugs and especially marijuana was a boon to law enforcement agencies all over the United States. Vast amounts of money flowed from the federal government to create drug task forces, buy equipment and hire people. The legalizing of marijuana in any form became an attack on the fundamental principle of a war on drugs.

According to Wikipedia, Marijuana (Cannabis) has been regulated since the early 20th century. But only since the war on drugs has it been demonized.

Here is some background in an article by Michael Austin of the Times Herald Tallahassee Bureau, Other states have done it. So why is Florida grappling with legalizing medical marijuana?

This is a quote from Senator Rob Bradley a Republican from Fleming Island, “It's really important to make sure that the storefronts reflect a true medical environment, and you don't see the commercialization in an inappropriate manner that you see in other states."

That is hog wash. Where in the legislation does it task the Legislature with that issue?

If that is the objective, treat medical marijuana as a drug and let it be sold by prescriptions from drug stores.

Why Not? Because our fine legislators can’t get their fingers in the multibillion dollar medical marijuana market if that happens.

So, hiding behind the now antiquated war on drug's hysteria regarding marijuana the State legislature has violated the voted will of the people.

The whole idea that legalizing smoking medical marijuana will be the pole that vaults into full legalization of marijuana is just plain crazy and a convenient excuse to keep the legislators playing at the marijuana game.

What will lead to full legalization of marijuana in Florida will be another ballet initiative supported by the people of this state.

I will sign the petition and vote for that one also.