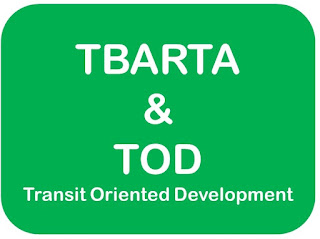 It is frequently used to destroy old and often poor neighborhoods in the name of progress as the current TBX project in Tampa shows.

Here is the real disaster of transit oriented development.

If you own a small or medium sized business in the Tampa Bay area pick up the paper one morning and notice the map of the proposed Tampa Bay super rail project runs a couple of miles from your business and the nearest station is about 3 miles away, you have a problem.

When you start looking for a location closer to the line and/or the station you suddenly find out all the available property has already been quietly picked up by “developers” and “investors” some of whom you may have voted for in the past and the prices are astronomical.

So why does it have to be trains? One of those definitions in Part 1 said “bus routes.”

It has to be trains so there can be a “taking” of private property through eminent domain so developers, investors and speculators can carve up the tracts of land created by the local politicians that the train tracks run through.

How do the politicians benefit? Follow the campaign contributions.

In a densely populated area like Tampa Bay an overlay of light rail will be an expensive, inefficient experiment that will end up a financial and practical disaster. Yet you can be sure that left unchecked the new TBARTA will be riding the rails as soon as possible.

In both Hillsborough and Pinellas Counties voters have shown their wisdom and voted down light rail driven initiatives. You would think the politicians would get it, but they prefer to believe they know what is best.

Next step in the new TBARTA effort is to get taxing authority and unless the Legislature puts a stop to the taxing authority or makes it contingent on a public referendum it will be game on for light rail and commuter rail.

The problem is they attack us as messengers, not with facts that legitimately refute our positions.

So, the next time you see Mayor Bob Buckhorn, Senator Jack Latvala, or County Commissioner Janet Long blowing off steam about those internet trolls who hate light rail, remember this; we don’t hate light rail, we just don’t want you to have to pay for ever for the mistakes of an uniformed few.