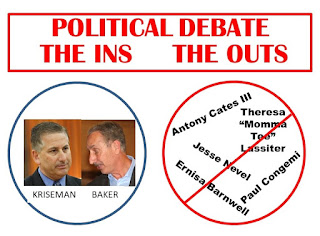 I want to hear what T. Lassiter and Jesse Nevel have to say to Kriseman, Baker, and to each other.

As we move into the early primary portion of the St. Pete, Mayoral election debate participation is being limited by debate sponsors.

The Mt. Zion Progressive Missionary Baptist Church will host the first debate Tuesday June 27 at 6:00 p.m. To participate in the debate candidates must be poling 10% or higher. No indication as to whose poll they will use.

The Tampa Bay Times along with Bay News 9 will be hosting their primary debate with just Baker and Kriseman on July 25 at the Palladium Theater. They are basing their debate participation on fund raising. Baker and Kriseman have each raised over half-million dollars leaving the other candidates far behind.

It just does not seem right to me to limit primary debate participation with arbitrary conditions designed to eliminate specific candidates.

I get the argument we want to focus on who has the best chance to win, but that’s what the general election is all about. I seriously doubt Baker or Kriseman will say anything any different in their primary debates than they will in the general election debates, unless they are forced to do so by one of these competing minor candidates.

I can understand the elitist attitude at the Times saying money talks and passion walks. Let’s just let these nice, white, normal politicians have a stage to tap dance their political stump lines. No one will get challenged, and nothing will get out of control.

All very civil and mostly pointless.

The position of the Mt. Zion Progressive Missionary Baptist Church surprises me a little. Captured in these non-money raising, low poling candidates are the burning issues that St. Petersburg needs to solve. Voices that need to be heard, and given the opportunity to respond to the debate questions asked.

The folks at Mt. Zion should know that better than anyone.

I want to hear what T. Lassiter and Jesse Nevel have to say to Kriseman and Baker and to each other.

Let’s do it like the Republicans did in the Presidential election, get them all on the stage let them answer and ask questions, slug it out and see if everybody can’t learn something.

If Kriseman wants to help the south side, here is his chance to get some ideas that may be hard to swallow.

Baker wants a seamless City, here is a chance to see some seams that need mending.

If these high poling, big money raising candidates really “love their City” and “want to do their best for St. Pete” they would tell these primary debate sponsors: “Either everyone is in or I am out.”

All, and I mean all, the voices deserve their chance to participate in the primary process.

Long and drawn out? You bet.

Not easily shoved into a preset TV time slot? Yep.

In the end, whoever wins will be better off for the effort.