The New St. Pete Pier – Will it really work? 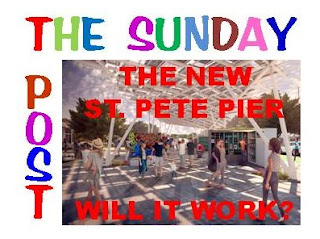 Will the New Pier and the Uplands survive Climate Change?

In an effort ease the pain of the escalating cost the Kriseman administration hired a consulting firm, Lambert Advisory of Miami, to perform an "Economic" Impact Study.

Impact Studies are those efforts usually led by an outside consulting firm that are used to justify the cost of some questionable public project.

Quoting from the More article: Karl Nurse seemed to sum it all up very well, "Candidly, I don't put a lot of credence on these reports. The impact of building something is pretty straightforward," he said, referring to the $17.5 million in wages expected from the 365 full-time jobs that would be created during the district's construction."

Follow on deduction, the rest of the report is just so much hype for the Kriseman reelection campaign to quote.

Currently, the City is waiting on some permits from the Army Corps of Engineers. If the Corp really wanted to serve the Citizens of St. Petersburg well, It would require a seawall of sufficient height to prevent the climate change and the rising sea water level Kriseman so willing adopts from flooding the project before it is half way through its useful life.

Then there is the proposed breakwater that will quite possibly present the Vinoy basin as a dead pool while disrupting the normal tidal flow along the coastal area of the New Pier.

Let's hope the Corp takes a look at all of that.

The economic Impact Study makes a number of assumptions.

The most questionable one is that people who visit here will actually come down to the New Pier, and those who live here will want to fight the traffic while driving through the concrete canyons of downtown St. Pete in search of the Pier and a parking spot to bring their visiting friends to the "New Pier Experience."

Given the fact that many of the people you talk to think the whole thing is a complete failure, my prediction would be it will be a mediocre draw for the first six to nine months or one winter season, and then the Pier becomes a curiosity that people tend to avoid rather than visit.

When the final cost is calculated, if it ever is, and the annual subsidy, upkeep and maintenance become clear in a real budget number, only then will the citizens of St. Pete finally know just how bad Kriseman and his band of political cronies actually hosed the people over.

Until then look for more glowing Impact Studies and Reports paid for by the Citizens of St. Petersburg and used by the Kriseman for Mayor Campaign.