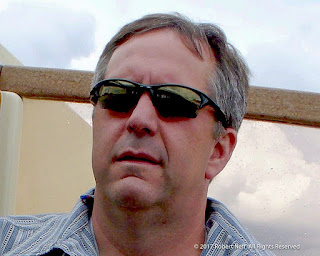 City leaders do not understand noise's impact to resident’s health.

Benchmarks enable the City to make effective decisions based on data analysis in real-time, thereby removing sentiment, political influence, and unsubstantiated claims of benefit and value.

The City's approach to revising the noise ordinance has been reactive, and subjective. From 2009-2016, there were 27,638 noise calls and no citations for businesses. How could the city not know this? By not relying on data benchmarks, our city leaders have wasted resident's tax dollars.

Up until 2016, business were winning the noise ordinance revision tug of war, enjoying the support of a pro-business Mayor Kriseman and majority on City Council, though some in Council Members support the residents. However, our city leaders do not understand noise's impact to resident’s health. There are dispatch audio calls where residents describe their walls vibrating, can't sleep or are subjected to constant thumping inside their home. Residents cannot escape. The stress could be avoided, but city leaders do not understand the health impact noise can cause. Without business-like benchmarks, there has not been a clear understanding of the noise issue.

I conducted a data analysis on the police call logs from 2009-2016. This revealed the noise issue was not downtown, but citywide. The #1 and #2 businesses for noise calls are in the Skyway Marina District and Bartlett Park Neighborhood area, and they are Flamingo Resort and Hollywood Nights South, respectively. The downtown bars are in the middle third. 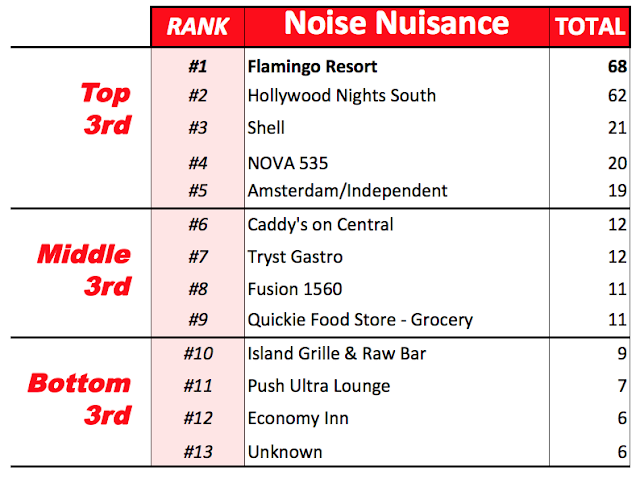 
Benchmarks allow the city, police, neighborhoods and resident to monitor the noise ordinance's success or failure. Benchmarks provide data in real-time allowing adjustments to be made to ensure residents’ taxes are no longer wasted on revisions that have failed before the ink has dried!

St. Petersburg residents are here for the quality of life, such as, restaurants, entertainment, museums and nightlife. Meanwhile, some businesses want to expand their revenue at the expense of resident's health. As the city grows, this battle will be get worse because the city leaders are not focused on managing the growth. St. Petersburg has become pro-business, sacrificing its quality of life.

Meanwhile, the City's pro-growth faction consists of residents, businesses and politicians. They have very little consideration, if any, towards those who are on the front-line suffering from the noise. Residents are being thrown under the bus. Residents are being sacrifice for the "Greater good of the city's revenue". However, the pro-growth faction is not getting pummeled by the noise and think the residents on the front-line are expendable. Nothing says community spirit more than being told to move or upgrade your windows!

The mayor and City Council members do not live near a business or address with repeat noise issue, but their constituents do. This is an election issue and the residents need to ask where their city leaders stand on the noise issue.  You can email your question to Mayor Kriseman and your City Council member.

Here is a look at a few of the benchmarks the city could use.

A comparison benchmark would compare how a businesses’ total calls and noise nuisance calls rank. The data shows the Flamingo Resort and Hollywood Nights are #1 and #2 for noise, and #2 and #1 for total calls, respectively. None of the downtown bars are in the Top 3rd for total calls. However, residents at near several bars, such as Caddy's, Fusion, Tryst and Ultra may have been assigned business' noise calls.

Figure 2. 2016 Comparison of incident and noise calls for businesses addresses with greater than 6 noise calls 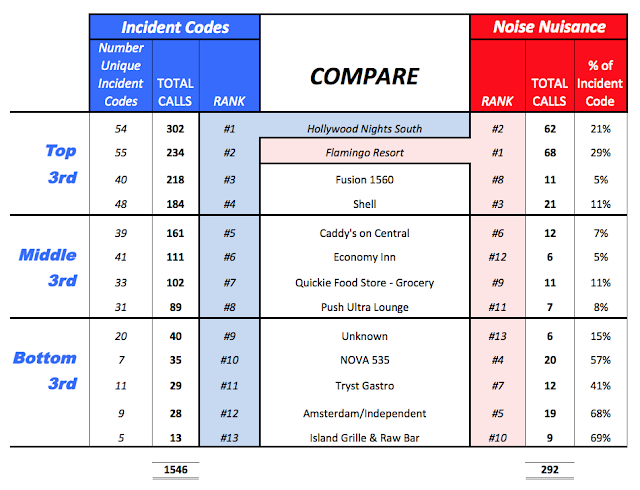 This benchmark demonstrates how no citations for repeat callers has caused the police to continually respond to calls. If the new noise ordinance were to have an enforceable deterrent, such as, fines for repeat calls greater than three calls, then these calls could be eliminated, police would have allocated those resources to other hotspots, and not wasted residents' taxes. This benchmark would have silenced the pro-business council members and written an enforceable noise ordinance that did not waste residents' taxes.

The dispute between the Tryst and residents led to the noise ordinance revision in 2016. However, Tryst is in the bottom 3rd. Appears the City unfairly targeted Tyrst because they did not use the data they own.

With the absence of benchmarks, negative resident sentiment, bar owner resistance, and pro-growth sabre-rattling are the only data points that seem to have been used to revise the noise ordinance. Here, benchmarks would have readily identified bars that have high repeat calls.

Reviewing the data, I found calls were under reported. Officers may assign the noise call to a residence or an intersection, instead of the business. Police dispatch has discretion to roll-up calls from one or more callers. While I was able to focus on a few businesses, to fully understand the calls, any benchmark must included these calls.

The Ratio of Non-Noise calls to Noise Calls is a benchmark that will identify business where calls may have been assigned to residences. A high ratio may identify other issues.

Figure 3. 2016 Ratio of non-noise to noise calls for businesses addresses with greater than 6 noise calls 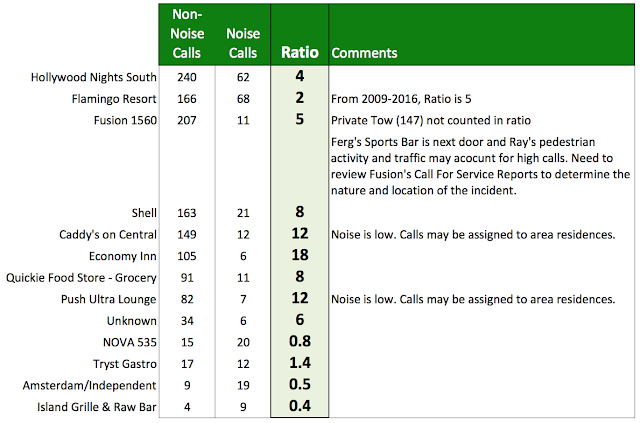 Top incident categories is a benchmark the City can use to determine the percentage of calls for each category for both all businesses with repeat calls. I have identified 11 distinct categories to determine total calls and the category’s percentage. This is useful for police, neighborhoods and residents to determine how a business is impacting the quality of life. This also permits police to address issues and reduce an upward trend. If needed, police can re-allocate  resources on a temporary basis to address the issue.

Figure 4. 2016 Incidents Categories for business addresses with greater than 6 noise calls with a Ranking of 1-5 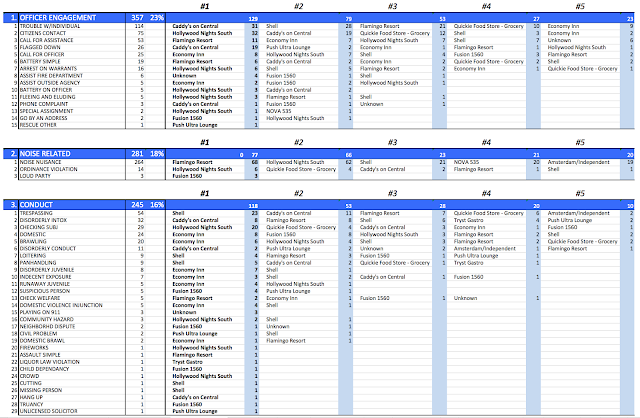 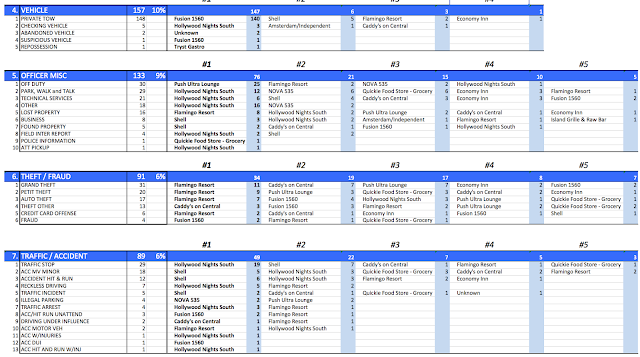 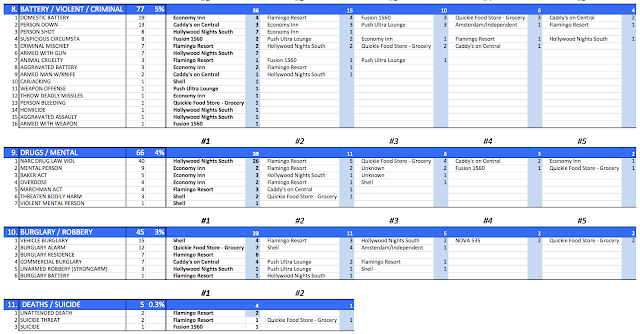 The list of incidents is a benchmark that details the incident type and number of instances each occurred. Repeat noise nuisance calls consistently rank in the top three positions for 11 of the 13 businesses.


Figure 5. 2016 List of incidents for each business with addresses with greater than 6 noise calls 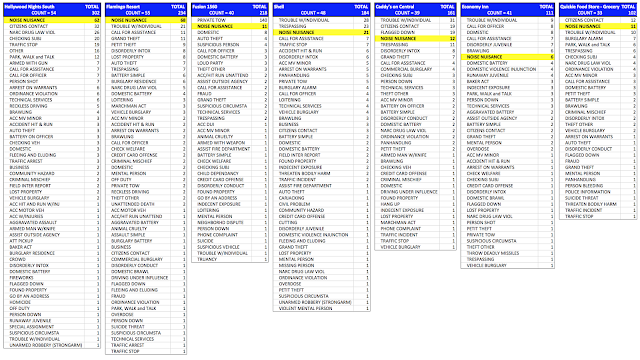 The noise calls seem high for Fusion 1560, an apartment building next to Ferg's and across from the police headquarters. Ferg’s Sports Bar only has one noise call. Therefore, I suspect some of the calls at Fusion 1560 may actually belong to Ferg’s. Comparison of the calls for Fusion 1560 and Ferg's Sports Bar deserves further review using the Call For Service reports and audio calls to police dispatch. Fusion 1560 has a bar located on the ground floor, but this has closed doors.

Fusion 1560 has an extraordinary number of private tows at 140. A review of the Call For Service Reports would provide insight into how many calls were for Ferg’s and event pedestrian and car traffic from Tropicana Field, where the Tampa Bay Ray's play baseball and events are hosted. 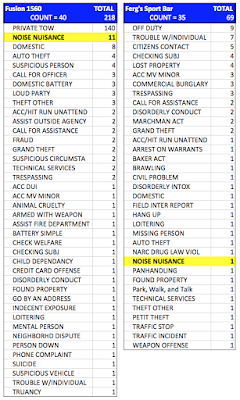 Note 1: Recommend political contributions be analyzed to determine if business have sought to exert influence through donations. Analysis would reveal any trends or potential conflicts.
Note 2: Flamingo is noise-related verses only noise nuisance, where noise-related includes noise nuisance, ordinance violation, and loud party. The surrounding residential area was reviewed. Call For Service Reports verified calls were assigned to the residents. These were included in the Flamingo Resort's numbers.
Note 3. The city has the data readily available. The police call logs are available in a data base. All data, reports and audio records were obtained through Public Records Requests.
Note 4. There were 425 unique nature of incident codes used. The number of unique codes is not a predictive factor for the number of noise calls.