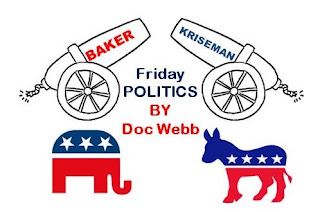 The Race for the Mayor's office in St. Petersburg is shaping up to be the most contentious in years - maybe even ever.

By the City Charter, the offices of the Mayor as well as City Council Members are supposed to be non-partisan (No Political Party represented). That provision of the Charter has been ever so gradually ignored as the City moved forward from the 1992 decision to establish a strong Mayor form of government.

With his decision to establish an Office of the Mayor based almost exclusively on political cronies, Rick Kriseman essentially tore up that page of the City Charter and threw it out the window.

Look for this race to be highly partisan pitting a Republican (Baker) against a Democrat (Kriseman).

It's not like the City doesn't have enough issues for Mayoral Candidates to beat each other up about. This time watch for every political twist and turn from the White House and Congress to the State House and the Legislature to somehow find their way into the St. Pete Mayoral Race.

Look for long lists of political endorsements from well-known to insignificant politicians, mostly just to get their name and hopefully a picture in a blog or the local newspaper.

How do you deal with that?

Keep in mind most they don't give a rats ass about St. Pete, they are just playing the political game.

There are, however, some that matter.

For example, a Pinellas County Sheriff Bob Gualtieri endorsement of Baker could be pivotal given Kriseman's attempts to position St. Pete as a Sanctuary City.

It will also be interesting to see if some of the early endorsers of Kriseman jump ship.

I am not sure how many real friends Kriseman has in the political stratosphere but if the Republican big guns, starting playing in the St. Pete Mayoral race some key Democrats may have to hold their noses and endorse the current Mayor.

Then there are the state and county political party committees.

With all the instability of politics from the national to the local level, a win in a City like St. Pete is a big deal. Traditionally, they stay out of these local races, but my guess is you will see a lot of outside side support and money flow from both sides of this issue.

Before you get too carried away with the political sideshow remember that St. Petersburg is a fast-growing big city in the midst of serious change.

This election is important.

Support your candidate with help and donations. Listen to the issues and promises and remember who actually kept their word to the citizens of St. Petersburg and who did not.