The Republican base is really screwed up 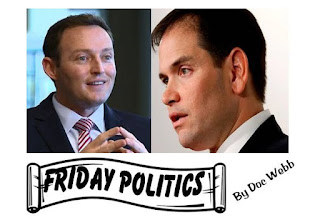 Why would you want to put Rubio back in the Senate where he will spend his entire time running for president?

For the life of me, I cannot understand why Republican primary voters would overwhelmingly vote for Marco Rubio for a second term.

I'll give you that his opponent Carlos Beruff, whom I supported, was a shaky option but to give Rubio such a margin shows me the Republican establishment is completely out of touch with reality.

Rubio who has the worst voting record in Senate, announced he would likely not serve out his term if re-elected and changes his position about as often as he changes his socks.

Six years ago on April 22, 2010, I Posted Republicans Should Be Cautious.

Why would you want to put Rubio back in the Senate where he will spend his entire time running for president?

Rubio's position on every issue will be: how does this affect my run for the presidency and not what can I do for the American people or Florida?

Rubio will tip toe around Donald Trump trying to pick up all the money and votes he can without really jumping on the Trump bandwagon.

Rubio's challenger for the Senate seat is Democrat  who comes with an exceptional load of baggage that I am sure the Rubio team can exploit.

Murphy is accused of questionable campaign contributions and padding his resume.

Just about, everyone agrees this will be a very nasty Senate race with lots of outside money flowing to both sides.

This race is shaping up to be the lesser of two evils.

If you follow my blog, you will note I have never been a fan of Marco Rubio. I think he is a self-centered opportunist and that actual public service is way down on his list of priorities.

In all good conscience, I cannot vote to set up a four or six-year presidential campaign funded by the taxpayers so Rubio can have a chance at the presidency.