The Jolly/Crist Debate My Most interesting Moment 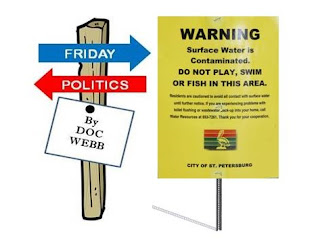 The more interesting moment was the exchange between Jolly and Crist regarding the current sewage mess in St. Petersburg and Tampa Bay.

You can catch up on the debate between David Jolly and Charlie Crist pros, cons and moderator critiques in the Tampa Bay Times and on a number of Blogs.

I'll leave the election politics to them with the comment: I thought Governor Christ did an exceptional job. (You will note below: I am a contributor to the Crist campaign.)

To me, the more interesting moment was the exchange between Jolly and Crist regarding the current sewage mess in St. Petersburg and Tampa Bay.

When pressed by Crist as to why he (Jolly) had not done anything or attempted to get federal support for St. Petersburg Representative Jolly simply replied because your Mayor, (Rick Kriseman) has not asked for anything.

I had been pretty much snoozing my way through the debate up to that point.

Could it be true that through all of this sewage dumping mess with waste swilling back and forth in Tampa Bay with the tides, Kriseman had never asked Jolly for some help navigating the federal bureaucracy?

I expected a torrent of Facebook Posts, Tweets and lists of emails from the Kriseman administration showing all they were doing to secure federal help for a mess it will take all the help that we can get to clean up.

Could it be that Kriseman is so politically partisan that he would not stoop to call David Jolly and ask for his help?

Is Jolly so crass he would not call the St. Pete Mayor and offer this assistance?

To me, this is a classic example of why Kriseman was so ineffective in the Florida Legislature. He has never learned how the business of government works.

Kriseman knows how to push selection committees made up of citizens around but has no clue as to how to use the political process and bureaucracy of the state and federal governments to his advantage.

Jolly on the other hand, seems so caught up in his passionate desire to "change the political process" that he would not aggressively make every effort to help his constituency regardless of politics when they desperately need it.

It appears to me neither is fit to hold office.