A City Transportation Referendum is a bad idea 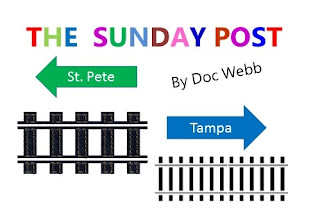 Once this mess begins, getting the locals to work together will be a bigger nightmare than the recent referendum efforts have been.


St. Petersburg Fl
Opinion by: E. Eugene Webb PhD
Author: In Search of Robin
Talk continues to surface regarding a city only transportation referendums in the bay area. The thinking seems to be these over hyped transit ideas would be an easier sell in the big Cities than they are in the un-incorporated areas and smaller towns.
It seems odd when these same people were talking about the “regional” benefits from a transportation tax and light rail during GeenLight and Go Hillsborough.
Locally, Tampa Mayor Bob Buckhorn and St. Petersburg Mayor Rick Kriseman are supporting the idea of a city referendum to get the transportation ball rolling or more likely the trains running.
Most of the opposition I have seen is based on Republican reluctance to raise taxes. So far, the local transit tax initiatives of the mayors have died a quiet death in the Florida Legislature.
There are a number of reasons why city transit referendums are a bad idea.
For any transit system to work in the bay area, it must be regional in design and scope. The thought of each of the larger cities in Pinellas or Hillsborough county developing their own public transit project is humorous at first and frightening when you think about it.
How do we provide for common technology, physical connection, intersystem transfers, ticketing and so on?
What this concept leads to is a patchwork quilt of disparate transit systems that do not communicate or seamlessly interconnect at any level.
A lot of people will make a lot of money, and nothing will work.
This whole approach is just another way for the light-rail  people to get their foot in the door. It is easier to fool a few people than all the people.
Once this mess begins, getting the locals to work together since each will have a fixed amount of money will be a bigger nightmare than the recent referendum efforts have been.
Then there will be the hold out(s) who will refuse to go along and the whole process will be a huge waste of taxpayer money, political capital and effort.
Instead of running around the state Buckhorn, Kriseman and the rest of the mayors pushing this local transit tax effort should work together to develop a multiphase transportation plan for their respective areas that shows some common sense and actually works.
Here locally, that means dumping the MPOs, TBARTA, transit oriented redevelopment disciples, light rail lobbyists and hire a group of professionals who can develop a multiphase transportation plan the people can have confidence in.
Hash it out, refine it. Use best brain power available. Put that plan on the ballot supported by a sales tax increase and watch it pass.
The people are not opposed to a transit plan that is based on common sense and regional needs.
e-mail Doc at mail to:dr. webb@yahoo.com send me a Facebook (Gene Webb) Friend Request, and be sure to Like or Share on Facebook.
See Doc’s Photo Gallery at Bay Post Photos
Disclosures: