Rubio – Why would Florida send Rubio back to the US Senate? 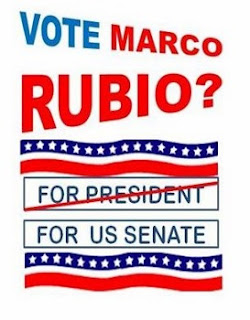 Most of his peers think he is a combination of a boy politician, opportunist and a political hack or worse.

What is so surprising to me is the lack of comment critical or otherwise about Marko Rubio's flip-flop on running for reelection. If you follow my blogs, you know I am not a fan of Rubio's.

I have always viewed Rubio as more self-serving than a public servant. What is also so disturbing is the number of political elite and members of Congress who were urging the lack luster Senator to run.

Translation - Rubio is easy to manipulate and/or you don't have to worry about him voting against one of your Bills he is never there.

Maybe Rubio's pitch to return to the private sector did not turn up any job offers like Charlie Crist has where someone will pay you big bucks not to show up.

The other problem Rubio has is that unlike Charlie Crist, who actually has accomplished something in his political career, Rubio has no votes, no major accomplishments or bills to brag about. Most of his peers think he is a combination of a boy politician, opportunist and a political hack or worse.

So his name on the door of a lobbying or law firm would probably not produce much traffic. No one cares what he thinks or says.

The other possibility is that after shaking off the pummeling from Donald Trump in Florida the reality of actually getting up every day, working for a living and being accountable for results was more than Rubio could handle.

So why would anyone vote for Rubio?
He doesn't show up and vote.
He does not represent Florida or any of its constituents.
He won't commit to serving his full-time as a Senator.
He has no viable record of accomplishment on the national stage.
He is fixated on running for President.

All Floridians would accomplish by sending Rubio back to the Senate is paying him $174,000 a year to run around the country promoting his next run for President while Florida twists in the wind longing for support in the US Senate assuming he could beat his Democratic opponent.

Watch the big Republican money line up behind Rubio. They all know that an investment in Marco will pay real dividends, and he won't forget all those big check writers because he will need them when runs again for President.

Florida Republicans can cut this one off in the Primary by sending the boy politician back to south Florida to look for a real job.