Problem Solutions or Votes – What is Kriseman looking for? 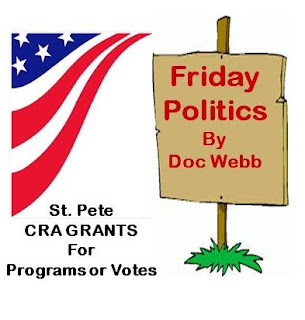 South side CRA is the Kriseman Administration trying to solve the problems or build a political base?

One quote caught my attention; Urban Affairs director Nikki Capeheart cautioned that," No single application is likely to get fully funded."

The article indicated 40 grant applications are expected, and it looks like the Kriseman administration is going to divvy up the $400,000 or so in CRA funds from the first round of the CRA Tax collection among a group of the "applicants"

Rather than fund, one or two of the applicants fully so they can accomplish their proposed mission in South St. Pete the Kriseman Administration is using the CRA funds to create a dependent group of providers who will have to support the Mayor politically to keep their funding.

Inadequate funding of a "group" of applicants will result in a series of failed attempts, people back in front of City Council begging for money to support their underfunded effort and once again the real victims of this type of buying votes politics are the citizens of south St. Pete.

Administering the South side, CRA in this fashion will end up with nothing to show for the efforts, wasted tax money collected from the people that can least afford to see their tax dollars wasted.

Kriseman should instruct the team evaluating the grant requests to retain a contingency fund of about $50,000 to help any program that gets in trouble, and to select a number of programs that can be fully funded from the remaining CRA funds.

If that is only one for this round, then so be it, better one program working than a group of programs failing.

We have seen that this type of program frequently underestimates the cost of operation, and they fail mostly because of underfunding not lack of effort. We already have enough Failure Factories in South St. Pete let us not create a group of failed programs that will frustrate the public and City Council.