Kriseman up to his neck in sewage 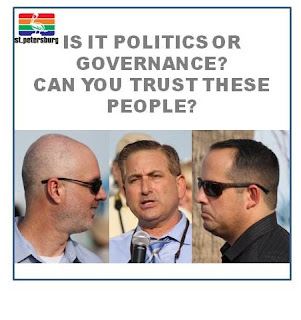 Ben Kirby posted a statement about the nature of the diluted effluent being released, which had to be walked back later.

For some background on the latest St. Petersburg wastewater debacle, you can check Mike Desson's Channel 10 Investigates stories below:

As tropical storms go, Colin may not be much more than a footnote in the weather records but he has turned out be a major disaster for Mayor Rick Kriseman and his City Hall team.

Watch the videos closely and you will see Ben Kirby, Kriseman communication Director and Kevin King, Chief of Staff, walking in circles as try to figure out what to do and say, while Kriseman looks like deer in the headlights as he tries to spin the situation in real time.

Claude Tankersly Kriseman's recently hired Public Works Administrator seemed to error on the side of honesty when he admitted there was raw sewage going into Clam Bayou, a statement which was then disputed by Kriseman.

Kirby posted a statement about the nature of the diluted effluent being released, which had to be walked back later.

The long and short of it is you could not believe a thing any of the senior staff or the Mayor was saying. There was a great deal more concern about the politics than the event.

Case in point was the decision to not make any form of public announcement or notify the City of Gulfport and refusing to make dump numbers public.

Where is Mike Connors when you need him?

All of this should make St. Pete citizens a bit nervous about just how much they can count on or trust the Kriseman team in a real emergency.

Kriseman and his dream team have had a relative easy run up to this point. No major disasters or serious storms up to now. To say they did not handle Colin well is an understatement.

Kriseman's decision to surround himself with a group of advisors in the office of the Mayor who have no practical experience and view everything through the eye of politics is finally coming back to haunt him. Kriseman should be paying more attention to Claude Tankersly and less to Kevin King.

Under no circumstances should a writer/blogger more interested in the Mayors' reelection than the facts issue an un-vetted statement that affects the public's health and safety. In situations like these, "word smithing" is never a good idea.

Kriseman and his "office of the Mayor" have been running on fumes since they walked through the City Hall doors. They were not ready when they took office and it seems they have learned very little in almost two years.