Bernie Sanders needs to fight on 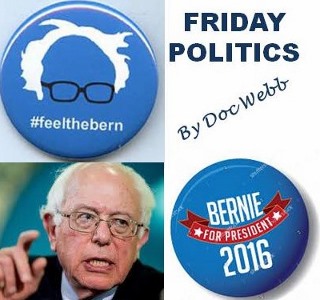 Bernie Sanders has done a magnificent job of lighting the socialist movement fire.

Bernie Sanders, the Senator from Vermont, has touched an interesting nerve in American society. Sanders', running for President as a Democrat, has never been a member of the Democratic Party. He has always been a political independent.

People put a lot of emphasis on Donald Trump's tapping into the anger of the US electorate. Sanders supporters think he has defined and brought to the surface the growing issue of inequity in our society.

Sanders has a distinctly different message. He is far left leaning some even calling him a true socialist.

Bernie has a strong following among young people and seems to have ignited a renewed interest in politics among college students and millennials.

There is an interesting biographical sketch in Wikipedia- Bernie Sanders.

From Wikipedia, In defining what democratic socialism means to him, Sanders said: "I don’t believe government should take over the grocery store down the street or own the means of production, but I do believe that the middle class and the working families who produce the wealth of America deserve a decent standard of living and that their incomes should go up, not down. I do believe in private companies that thrive and invest and grow in America, companies that create jobs here, rather than companies that are shutting down in America and increasing their profits by exploiting low-wage labor abroad."

Those who went to college and piled up tens of thousands of dollars in debt to prepare themselves for a future only to find out the education they paid for does not have near the value it promised or cost.

Student loans are an anchor they will drag behind them for years and facing a political and economic system that could not care less they are taking a fresh look at socialism, and they like what they see.

Expecting to be in the upper class, the majority of the recent college grads and millennials find themselves struggling in the lower class and Sander's message rings home.

Sanders should not end his campaign for President, in fact, the movement Sanders has begun needs to define new leaders and continue past the 2016 Presidential election.

No matter, whom wins in November, Clinton, Trump or a Republican dark horse, the new President and the Congress will do little to address the growing unrest with the capitalistic form of government since these are the people that paid for their election.

With a fragmented Republican Party and a Democratic Party that cannot seem to agree on anything the opportunity for a ground-up socialist movement seems to be ripe.

Sanders has done a magnificent job of lighting the socialist movement fire now it needs careful nurturing to grow into a full-fledged political movement.

Keep on trucking Bernie, your political child is about to be born.