Down Ballot a Republican dilemma 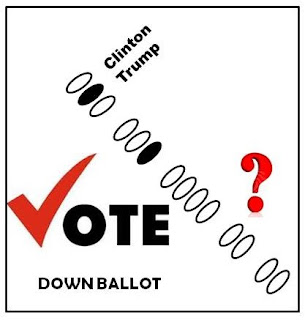 Trump has brought in many new voters but will they vote down the ballot?

Never heard of the term down ballot here is a definition from Google: denoting a contest for a political office that appears in a relatively low position on the electoral ballot, which typically lists contested offices in descending order from national to local.

You will start to hear this term tossed around a lot as the Republican Primary narrows and the likelihood Trump will be the nominee increases. Party politics have long depended on a presidential nominee to unite the Party and be the source of votes for those at the State, County and local level running as Party candidates.

Down ballot party influence is what has kept political parties in control of the US political process for decades if not centuries.

This time, however, when challenged by a political outsider, Donald Trump, where the typical Party controls of money, influence and threats have not managed to keep the candidate in line or derail his march to the nomination panic has begun to set in.

As more and more of the Party establishment endorses "anyone but Trump" they would be wise to remember that Trump has a long memory and those endorsements which make the Party elite giddy may just come back to bite them.

The Republican Party is seeing the Party structure start to fracture and crack.

What if Trump is nominated?

He has brought in many new voters but will they vote down the ballot?

Will Trump work for the down ballot Republicans or will the Party be left twisting in the wind to save national and state legislative seats.

Will local candidates for partisan offices get any help at all?

There are some unannounced Republican candidates who might like to run, but some of them may pass not even wanting to be on the Ballot with Trump at the top. Locally, Rick Baker comes to mind.

The Republican Party is quickly backing itself into what may be an unmanageable situation. A Presidential nominee that they do not like and who does not like them, a new group of voters who really do not understand the issues or the politics and a growing distrust not only from the new Trump voters but from inside their own ranks.

As the public watches one after another high profile Republican slither up in front of the TV cameras and denounce Trump while two clips later, they see Trump in rallies with 10s of thousands of people Republican credibility continues to crumble.

The ripple down the ballot can and probably will affect everything from School Board elections to the State legislature.

Down ballot Republicans have a lot to worry about and some big decisions to make. Do they follow the Party line against Trump or go with the people and hope for the coattail effect?
We should start to get that answer next week.
E-mail Doc at mail to: dr.gwebb@yahoo.com or send me a Facebook (Gene Webb) Friend request. Please comment below, and be sure to share on Facebook.
See Doc's Photo Gallery at Bay Post Photos.