Bait and Switch? Entice and transfer? Deflect and deceive? The New New Pier design is here 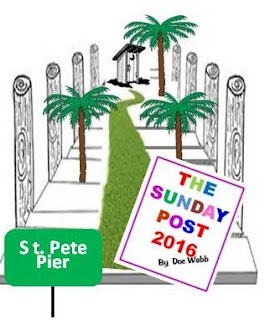 No one should be too surprised given the Kriseman efforts to push this disaster through the process and get the old Pier torn down.

The long-awaited  St. Pete Pier Design proposal is here, and I bet you thought it would actually resemble the design the Kriseman administration crammed down your throat.

Boy were you wrong.

My original graphic was closer than I ever dreamed.

No one should be too surprised given the Kriseman efforts to push this disaster through the process and get the old Pier torn down.

Here is an e-mail I received:
Speaking of jokes, bad jokes, this new pier design is even worse than the first one.  The Times' blog is so telling, nobody likes it and they are roaring again.  I have heard that there is a petition to take it on via the City Charter.  They are making a royal mess of the waterfront and I remember the people at the Birchwood Hotel objected to the City fostering restaurant development on the pier and how parking is being reduced.  HELP!  Isn't there something that someone of your stature can do?  Nobody listens to us "little people"  You know, when St Pete designed their own piers, they were great.  This one is terrible and will have huge subsidies and reduced attendance.  That picture of the upscale crowd at the proposed restaurant is telling.  They don't want us locals down there.  How dare they?  If you remember, not one restaurant company put in a bid for the proposed restaurant at the end and do you think that they would listen?  nope.  Everyone is calling it Potty Park again as the fresh water wading pool is still in the design and since they are working to get the homeless people out of Williams Park, they will proably gravitate to the wading pool and ample bathrooms.  I hate to say it but this mayor is worst than the last one. - JC

Will Kriseman's fellow Democrats fall in line with the Mayor praising the new design as what the people want or will someone have the courage to blow the whistle on this mess and go back to the drawing board?

Their answers will be interesting.

Where was the City staff responsible for this project during this process? It does not take a rocket scientist to figure out this design is going to be a serious problem with the public and reopen some old wounds.

It looks to me like a lot of money is going into plans and politics that should be going into bricks and mortar...

Unless I miss my guess, Kriseman and his team are in for some rough meetings as the public process goes forward.