Would you really want Marco Rubio negotiating with Vladimir Putin? 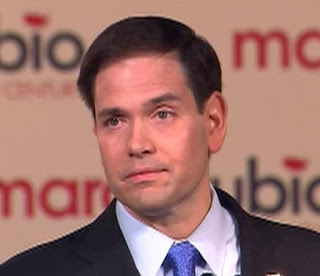 If there was ever any doubt that Rubio was not presidential material, he confirmed it in the most recent debate.

I watched the last Republican Presidential debate swinging from laughter to outright fear. Here was Trump being wailed away on remaining mostly calm and in control while Rubio hurled insults and rapid fire accusations.

My first thought was, “How would I like to have this guy negotiating with Vladimir Putin?

Somewhere between the 3rd and 5th Rubio tirade, Putin would either reach across the table and strangle him or just get up and walk out of the room laughing hysterically.

Talking at machine gun speed, Rubio mustered up every bit of immaturity he could put on display and what was worse he seemed to revel in his behavior grinning and smiling like 4-year-old.

Political theater? Maybe, but do you really want to put a tantrum throwing career campaigner in the White House?

They all talk a lot about Trump’s inexperience and lack of knowledge in politics, foreign policy and government, but the facts of domestic and foreign policy are easy to come by. Budget, management, leadership and finance are unilateral skills that are in Trump’s wheelhouse. Where Trump is far above all of his fellow Republican competitors is his ability to sit across the negotiating table and control the process.

What we saw Thursday evening was neither Rubio or Cruse know how to deal with someone they have no advantage over. Faced with a level playing field or one tilted against them they revert to hysterical rock throwing which only puts them at a further disadvantage.

These days virtually everything a President of the United States does is a negotiation. US Presidents are surrounded by large groups of people and specialists who are responsible for getting the facts. It is the President’s job to provide leadership and then get the deal done.

Do you really think Rubio or Cruz can get that accomplished with Russia, China, Japan, Iran, the Senate, the House, the Democrats or the special interests?

While your contemplating that question think about this. How good will you feel with Marco Rubio sweating, whining and yelling across the negotiating table at one of our adversaries that is almost as powerful as we are and more than willing to exploit any weakness they perceive?

I don’t know about you – but it scares the hell out of me.