What else don't we know about the St. Pete Pier AKA Pier Park? 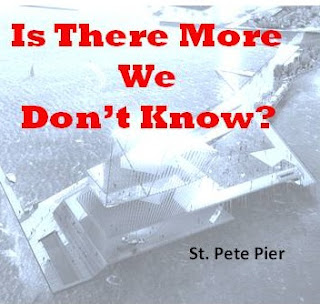 One has to wonder what new surprises await in the "New" St. Pete Pier (Pier Park) design.

St. Petersburg, FL
Opinion by: E. Eugene Webb PhD
Coauthor of: So You Want Blog.
This past week we were informed that the Kriseman administration has known since June of 2015; the name Pier Park was an infringement of a trademark owned by the St. Joe Company.

There was no valid reason to keep all of this on the hush hush when the best the Kriseman team could do for a new name was the St. Pete Pier.

While this may seem a bit trivial in the long run, it begs the bigger question what else are they keeping under wraps?

Most of the design modifications are being conducted just out of public eyesight by the same team that brought us the LENS. Reports to City Council have been broad brush at best, and it is a pretty sure bet that not a single council member has a clue what's actually going on in this phase of a $40+ million dollar contract.

Same can be said for the hastily arranged and approved $20 million "uplands project" where there is even less transparency.

Based on experience it seems unlikely that the Kriseman administration will willingly open up and provide significant information about either of these projects.

One has to wonder what new surprises await in the "New" St. Pete Pier (Pier Park) design.

The Kriseman administration is desperate to get both projects moving and as this recent revelation would indicate they are really not playing straight with the public or the City Council.

It is time for some serious fact finding. City council would be wise to take some steps to ensure they don't find themselves backed into a political corner on both of these significant and costly projects.