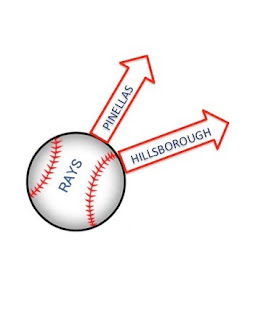 If baseball is the first concern of a company, Vinik is trying to lure to Tampa, I think I would look around a bit.

Last Friday Jeff Vinik made an appearance at the Cafe Con Tampa discussion group meeting at Hugo's Spanish Restaurant in South Tampa. You can read the details in Richard Danielson's Tampa Bay Times article For Jeff Vinik, the key question is not which side of Tampa Bay the Rays play on

Vinik was asked yet again about a new Tampa Bay Rays Baseball Stadium in down town Tampa.

He nicely soft balled the question and then added, "If we lose the Rays, when I fly up to New York or Connecticut to talk to a company (about moving here), I’ve got two strikes behind me: ‘You guys can’t even keep baseball in your community?’ That’s literally going to be the response.”

I hate to disagree with the father of all things' downtown Tampa, but if that is the first concern of a company Vinik is trying to lure to Tampa, as the landlord I think I would look around a bit.

Actually, the bigger question might be: why are you guys wasting all of that public money on something that has already proven unsuccessful in the Bay Area?

Major League Baseball has for years sold the myth that baseball and MLB teams and big stadiums equal economic development and they are a pivotal part of a community's signature.

The concept of Major League baseball driving economic development has simply not panned out in Pinellas County and there is little to indicate that would change even with a shiny new stadium in Hillsborough.

Also note that so far Vinik has politely refused to put up any of his holdings as a site for the new stadium.

True, it is nice to wave a lot of shiny bobbles, like Major League Baseball in the eyes of corporate relocation decision makers, but I think more and more of them are seeing these big sports complexes as a hole into which public and private money is thrown.

Hillsborough County, Tampa, Mr. Vinik and the corporations he would like to attract downtown would all probably be much better served if instead of pouring 100s of millions of dollars into a baseball stadium, the County and the City would focus on putting together a scandal free public transportation plan and investing those dollars as much as possible into roads and public transportation where everyone can benefit.