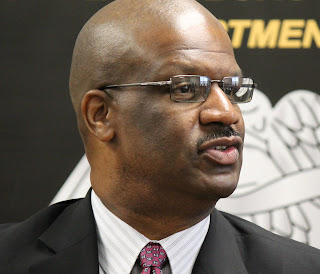 The don't snitch culture is still alive and well.

With a rash of shootings on their hands, the St. Petersburg Police Department is struggling to get information. Since November 10, 2015, six young St. Petersburg men have been murdered.

The St. Pete PD has been urging people to come forward, but it seems there is a lack of cooperation from the public.

All of this raises the question about how effective Chief Holloway's efforts at resolving issues with south St. Pete's residents have been. See more in the St. Petersburg Tribune article Police seek community’s help after another teen killed in St. Pete.

From the Tribune article, St. Petersburg assistant police chief James Previtera said, "Lord’s death is the sixth involving a victim between 16 and 25, a “frustrating” trend that highlights the need for anyone with knowledge of the circumstances to “step forward” and assist in helping find the suspect in this latest shooting."

There was more than a little frustration in Assistant Chief Previtera's comment, “The police department can do our job and investigate evidence, but the best evidence we can have is an eyewitness, and we need this community to step forward as far as stemming this kind of violence. We need the people in this city — churches, civic leaders, parents to join with us and to get the word out to these kids.”

Apparently, the Park, Walk and Talk program is not producing the kind of results that the Police Administration hoped for.

The Park, Walk and Talk program is a slow and steady approach to the problem of police public relations in all of St. Petersburg, but in a world where the rate of everything is increasing at an exponential rate the old "cop on the beat" approach may not be working.

Some casual conversation, a smile and maybe a handshake from a Police officer who then gets back in his/her cruiser and moves on is probably unlikely to build the kind of confidence that people need to risk their lives when they inform on their neighbors or people transiting their neighborhood.

The don't snitch culture is still alive and well. New counter measures like the creation or expansion of cyber crimes unit with staffing to monitor local social media activity might be more effective.

The other response to the current homicide problem which has been voiced by the Kriseman administration is the easy access to and the large number of guns available in St. Petersburg. True these are problems, but they are unlikely to go away given our gun centric culture.

Typical of the response is the Mayor's March down First Avenue South from the PD Headquarters to 22nd Street. It all makes for a good media event, and some sound bites, but in reality, it will have no effect on the circumstances that lead to the recent six homicides.

In fact, it would have made a bigger impact if the March was on 18th Avenue South.