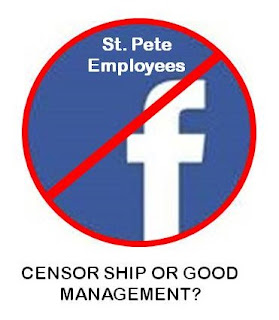 In what has to be the most childish act yet of the Kriseman administration, they have given five-day no pay suspension to a St. Pete Storm Water employee, Robin Wynn, who referred to the Mayor as a "clown" in a Facebook comment.

You can read the details in the SaintPetersblog post by Janelle Irwin: St. Pete City employee suspended for 5-days for social media dig on Mayor Kriseman

Let me clearly state that everyone should be a bit careful about what they post on social media but this is major over reaction by the Kriseman administration.

As to the "clown" comment, among the people I talk to, "clown" would be a compliment compared to the way they normally refer to the Mayor.

Leave it to Kriseman and his crack team of advisers to go after someone they can easily scare and intimidate to set an example.

There may be more to this than the obvious questionable call of City rule.

For example, employees both sworn and non-sworn from the Police Department routinely have interesting things to say on the social media site LEOAFFAIRS, and I don't see any attempt to go after any of them.

Maybe the real issue here is equitable enforcement of a City rule. Or is it a double standard where cops get a pass, Storm Water employees do not? Or maybe it's ok to go after your boss or fellow employees on social media but not hiz honor the Mayor.

This attack on an employee, especially one with limited resources to defend themselves, will put a heavy damp blanket over all City employees and will make all employees more fearful of expressing their opinion and views on what is going on at the City. That type of repression affects your ability to know what's going on and is probably the real Kriseman objective.

Creating a hostile workplace with threats, suspensions, double standards and fear of reprisal that's not what you elected Rick Kriseman to do.
Kriseman should stop having his staff call people in to "discuss" their Facebook page, step up and remove the suspension, apologize to Ms. Wynn and act like a man instead of a wimp.

Most clowns are smart – not stupid.