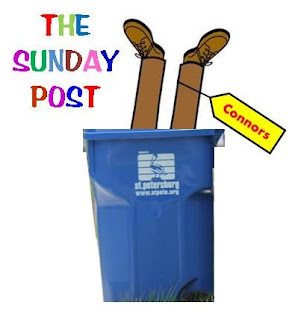 St. Petersburg, FL
Opinion by: E. Eugene Webb, PhD
Coauthor of: So You Want to Blog
With little fanfare Mike Connors the front and center get it done guy for the Kriseman administration has been mildly demoted. Actually kind of recycled.
You can pick up the details in Kameel Stanley’s Tampa Bay Times article: Kriseman cuts back duties for administrator who oversaw recycling.
The Sanitation department and the Purchasing department have been removed from Connors’ span of control.
In response to an E-mail Ben Kirby, Kriseman Communications Director, indicated Sanitation will move to Neighborhood Services currently run by Mike Dove and Purchasing will report directly to Gary Cornwell City Administrator.
Connors has be a lightening rod most recently in both the Pier Park decision and the very noisy launch of the City’s recycling program.
It appears all of this leaves Connors still in charge of the City’s two largest construction projects, Pier Park and the new Police complex.
Best quote from the Stanley article: “In Mike’s role as a public servant and an operations manager, authenticity and humility, as well as being a good listener and communicator, are so important,” said Darden Rice. “People don’t want to feel managed. What we want are straight answers and real collaboration. Mike is used to doing things his own way, and that approach has not produced the best outcomes.”
Great observation and things are not likely to change.
Kriseman and City Council’s issues with Connors are not over. Despite the efforts of the Mayor’s office via Kevin King to assure everything is ok between the Dream Team and Connors those of us who have worked with Mike know he rarely goes quietly into the night.
For those who would have preferred Connors be fired the fact is Connors is probably the City’s best large scale project manager, and he has kept it that way through his hiring practices for years.
I don’t know who has been given the responsibility to keep watch on Connors, but if it is anybody on the Mayor’s Dream Team Mike is grinning from ear to ear.
For now Connors will have more time to focus on his three primary objectives: getting that damn Pyramid torn down and keeping the police building as austere as possible.
What’s the third objective? I’ll leave that to your imagination.
E-mail Doc at: mailto:dr.gwebb@yahoo.com or send me a Facebook (Gene Webb) Friend request. Please comment below, and be sure to share on Facebook and Twitter. See Doc’s Photo Gallery at Bay Post Photos
Disclosures:
Contributor: Waterfront Charter  Amendment (Vote on The Pier), Carly Fiorina for President