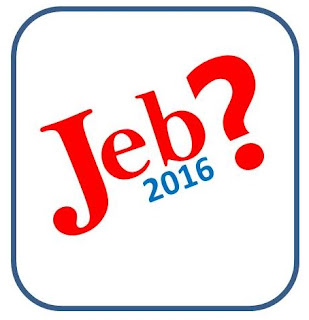 Jeb Bush tossed his hat in the Republican Presidential campaign ring this week, though it was more like a lob since he has been effectively running for six months or so.

A Quinnipiac poll taken in Florida this week, shows Hillary Clinton leading both Bush, oops, Jeb, and Marco Rubio. It is even more interesting because the same Quinnipiac Poll shows those same voters think Hillary Clinton is NOT honest by 51-43 percent margin.

It would seem Florida voters would rather have someone they think is dishonest in the White House as opposed to someone they just can't stand or maybe is not female.

It is obviously still early, but Republicans would be wise to take this early polling to heart and begin to develop a strategy that speaks to women as well as minorities.

In post announcement interviews and appearances Bush (Jeb) seems a bit stiff and at times uncomfortable. He is going to have to shake off the "Bush" issue and either embrace it or just completely ignore it and start smiling, really smiling, and stop looking like there is someone behind him with a sharp stick prodding him forward.

It would also be a good idea if some of the big money people in the Republican Party shoved a little money in Carly Fiorina's direction and at least get a female voice on the stage that gives women someone to relate too.

The other option may be for one of the leading contenders or a lesser known to pick a strong, articulate female vice presidential candidate now and run in the early primary as a package.

If Jeb and his handlers had the courage to pick a strong female vice president now, even with all the risks that entails at this early date, and let the VP work the campaign trail they could really turn up the heat on Hillary.

Republicans have got to figure out the women issue in this campaign and they must do so early.

For now I look for Jeb to slog along the campaign trail, trying desperately to not make a major gaff, fending off the Bush issue and the dynasty problem, while laying out his presidential agenda.