Carly Fiorina a voice that needs to be heard 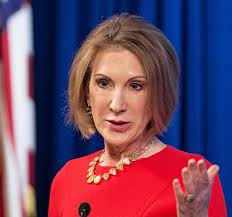 Carly Fiorina is one of a growing group contending for the Republican nomination for President of the United States. Unless you follow politics closely, you may not have heard of Ms. Fiorina yet.

You can find out about her at her campaign web site Carly Fiorina for President.

Carly, a former CEO of Hewlett Packard the computer company, has never held political office. She ran for US Senate in California in 2010 and was defeated by incumbent Barbra Boxer.

Why is Carly Running for President? Here is a quote from her campaign WEB site:

"Our founders never intended us to have a professional political class. They believed that citizens and leaders needed to step forward. If you believe that it's time for citizens to stand up to the political class and say enough, then join us."

She brings an important voice to the Republican nomination process. A political outsider with a true global perspective, Fiorina brings a fresh view to the domestic and geopolitical stage.

Fiorina comes to the political process in the unique position of being the only Republican who can stand toe to toe with the leading Democratic contender, Hillary Clinton, and ask and answer the tough questions with no fear of gender bias being used as an excuse or defense.

That alone makes her decision to run for President key in the race for the Oval Office.

A call to the Pinellas County Republican Party office indicated that as of now there is no organized effort to support the Fiorina Campaign, but it is still early in the process.

Can Carly Fiorina win the Republican Presidential nomination? That remains too seen.

For now check out the WEB site, follow the campaign on line and listen to the future of politics and governance in the 21st century.