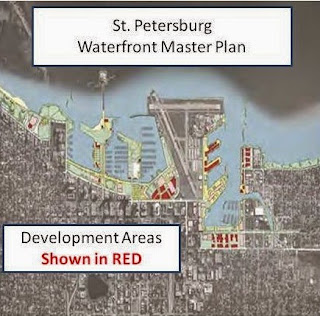 By: E. Eugene Webb, PhD
Coauthor of: So You Want to Blog

Rarely do I find myself on or close to the same page as the Tampa Bay Times.

Their Editorial: Drop hotel from St. Petersburg waterfront plan is an interesting read.

The Times Editorial recommends, " One unnecessary concept — a hotel and conference center — has provoked criticism and suspicion among a citizenry that has repeatedly rebuffed such for-profit intrusions onto the waterfront. The council should approve the plan but reject the hotel idea."

I certainly agree but City Council should go even further and make it clear that the large number of "development" sites I pointed out in my Post St. Pete's Waterfront Master Plan...... "It's Like Hitting the Lotto" ..... Take a look at the Pictures and note the areas flagged as "Development" sites does not constitute a change in direction for the downtown waterfront.

The Times Editorial takes a shot Councilmember Steve Kornell's position that he will vote against the plan if the hotel stays in the plan. Putting aside the fact that Steve is up for reelection, it will likely take a strong stand from not only Kornell but also several other Council members to get any significant change to the Waterfront Master Plan.

While it is true that the Waterfront Plan is simply that, a plan, once adopted by City Council it will become the reference point for all challenges to the use of the waterfront.  The development emphasis of the proposed plan could be toned down considerably without having a negative effect on the plan's viability.

I am sure the Times and a lot of other downtown power brokers are concerned about the pending waterfront referendum and toning down the Waterfront Plan may take a little steam out of the referendum effort.

You can read the plan at Downtown Waterfront Master Development Plan.

I still remain convinced that the only way the citizens of St. Petersburg can assure their waterfront is protected is by having say through the referendum process.

You can check out the Referendum petition at Waterfront Charter Amendment.