How Do You Treat an Icon Part 2 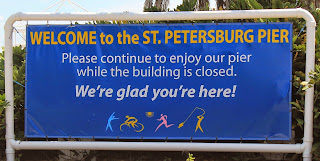 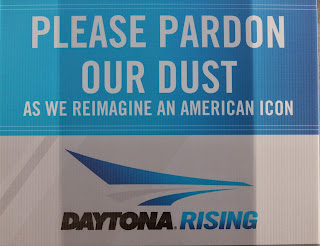 About a week ago I Posted How Do You Treat an Icon? a kind of loose comparison between Daytona and how they are looking at refurbishment of the Daytona International Speedway verses how the City administration is approaching the issue of the Inverted Pyramid. I included a picture of the signage around the speedway which includes the line: "Pardon our dust as we reimagine an American Icon".

The Post inspired an e-mail response from the Kriseman administration: "Pretty sure we have a similar sign by the pier as the one you reference in your story."

The response raised my curiosity a bit so I took a trip to the Pier to check it out.

I thought it would be a bit odd for the Kriseman administration to admit the iconic status of the inverted pyramid on a public sign given their almost fanatical desire to tear it down.

Sort answer: no they don't have such a sign - not even close. The immaturity of Kriseman's inner circle and their lack of knowledge of reality continue to show.

To further indicate the level of respect or lack thereof the administration has for the current structure, the sign on every Pier entrance door is a simple sheet of letter stock printed on an inkjet printer. The sign says only "BUILDING CLOSED".

I am not sure where all of this lack of respect or appreciation for a structure that drew 10s of millions of people to St. Petersburg over the years comes from or the fanatical desire to tear it down.

To his credit Mayor Kriseman did open the approach to the Pier and the area around the structure, but there is just a port-a-potty and no drinking water or concessions.

The day I was there a couple of people were fishing on the approach and some people taking a few pictures. I sat out at the Pier head for a while and could not help thinking about all of those millions of visitors who came to see this unique structure and the literally millions and millions of pictures with that structure in the background in photo albums all over the world.

Something is terribly wrong.

From the beginning the plan was never to tear down the Pier. That idea, tearing the Pier down driven primarily by one or two people, has now influenced two mayors and convinced them that the public should not be listened to.

City Council now holds the key to the Pier's future. It's time for common sense to prevail.