Baseball – Wasting too much political capital 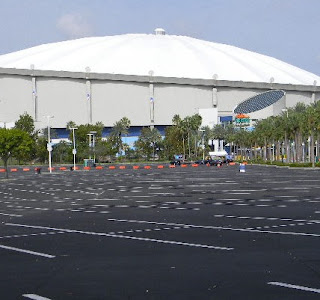 Thursday's St. Petersburg City Council workshop on the Rays request to look around Tampa Bay for a new stadium site was as much theater as it was workshop.

If you want to catch a blow by blow view, check out saintpetersblog, Janelle Irwin's: Live blogging St. Pete City Council’s Rays drama one Wengay rant at a time.

I was there for about half the meeting caught some more on TV back at my office.

The USF Student design mockups were interesting and exciting to say the least. They were also a major distraction and cost the meeting about an hour of pretty much pointless discussion.

Note to Chair Gerdes: City Council is easily distracted. Next time someone wants to bring an exciting new concept that has very little do with the actual agenda into a meeting consider saying no politely.

At one point Council Chair Gerdes indicated he was pleased with the wide ranging discussion. I agree. There was a lot of generally useless information tossed around, a few tidbits of relevant information and all of that was apparently enough to get Amy Foster to flip flop on her position.

Every time the Rays issue comes up Mayor Kriseman sounds more and more like the Rays attorney than he does the people's representative.  Kriseman does make a pretty good case for the MOU, but I agree with Steve Kornell the upfront nut to move should be bigger - a lot bigger.

I like his $55 Million, with an annual de-escalator. Should not be a problem given the general agreement that it will take seven years or so to get a stadium up and running. By then the remaining amount should be reasonable. Unless the Rays have a hidden agenda.

Note to Mayor Kriseman: Put a muzzle on your resident political operative, AKA Chief of staff. Watching the expressions and the body language I am pretty sure almost no one dais really cares about his opinion or sparring with him. Next time someone should make that clear.

Finally, I am a big believer in the theory that people, teams and organizations possess a finite amount of collective energy to accomplish their mission. Baseball is sopping up way to much energy and time from both the administration and the City Council.

Regardless of the "economic impact" baseball is a major distraction from critical issues like the south side, aging infrastructure, a questionable Downtown Waterfront Master Plan and a host of other issues.

Baseball wants to leave St. Pete. They don't want another stadium on the same site because in reality they believe the location is at least 50% of the problem.

It seems up to this point they would like to leave somewhat gracefully. It's time to put another offer on the table that addresses Council's concerns and see how the Rays respond.