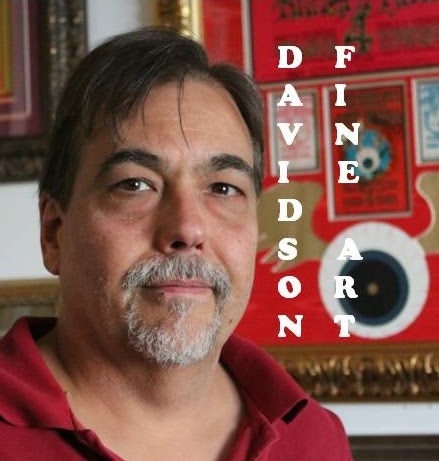 To get some perspective about the St. Pete Arts scene, earlier in the month I sat down with Rob
Davidson and his staff of Davidson's Fine Art Gallery to get the view of a long time member of the St. Petersburg Arts scene.

This is the fourth of a 5 Post series where Rob Davidson talks about his Gallery, the Arts in St. Pete and how he sees the future of the arts in St. Petersburg.

My Questions are in Bold

"Have the "art walks" been successful for you?" I began.
"You know, we used to be on the Trolley stop and it never really did anything for us. We had nights where there would be two or three people all night long so we dropped off of that. I am considering getting back into it since it looks like they are putting a little more effort into the program."

What do you think it will take to move the St. Pete arts district to the next level?
"I think you have got to stay with the grass roots thing," Rob replied.

"I don't think we should try to become Miami or something. I think what the City needs to do is to do more projects with artists, taking buildings that the City owns and turning them into communal artist spaces. I know there is already doing something like this but they need to do more of that."

"Then instead of gentrifying a neighborhood by moving the art scene in and then jacking the rents up like they did in the 600 block. That place is going to get hollowed out because they jacked up the
rents. They had affordable rents, brought in all of these cool little galleries and as they raise the rents everybody is moving out."

"So to me that's kind of the gentrification process, the artists move in, they take a neighborhood other people don't feel safe in, they make it a cool place. Look at Ybor City. It was not a safe place to go at one time. As the art scene moved in and Ybor became cool, all of the bars and everything moved in and drove the art scene out. Now the art scene isn't there anymore and now it is a tourist place."

"What has to happen is you have to give the artists a building they can own communally, build their studios and not get driven out by high rents as soon as they fix the place up. It has to become a permanent fixture in the neighborhood. The people that put the sweat equity into fixing the thing up should have a reward in the form of a condo studio that is actually theirs."

As we move into the City budgeting cycle, what do think the City should do in terms of funding for the arts district and the arts in general," I asked?
"Where I think they could be more active is to promote more shows for City artists. More events like Mainsail where the show becomes a tourist attraction to bring more people in. These shows would be a way of rewarding artists with recognition and prizes that the City would put up." The effort should be cooperative one working with the local artists, galleries and shops."

Next, in the final Post of this series, Rob talks about the value the arts community brings to the City and weighs in on the New Arts Warehouse project.