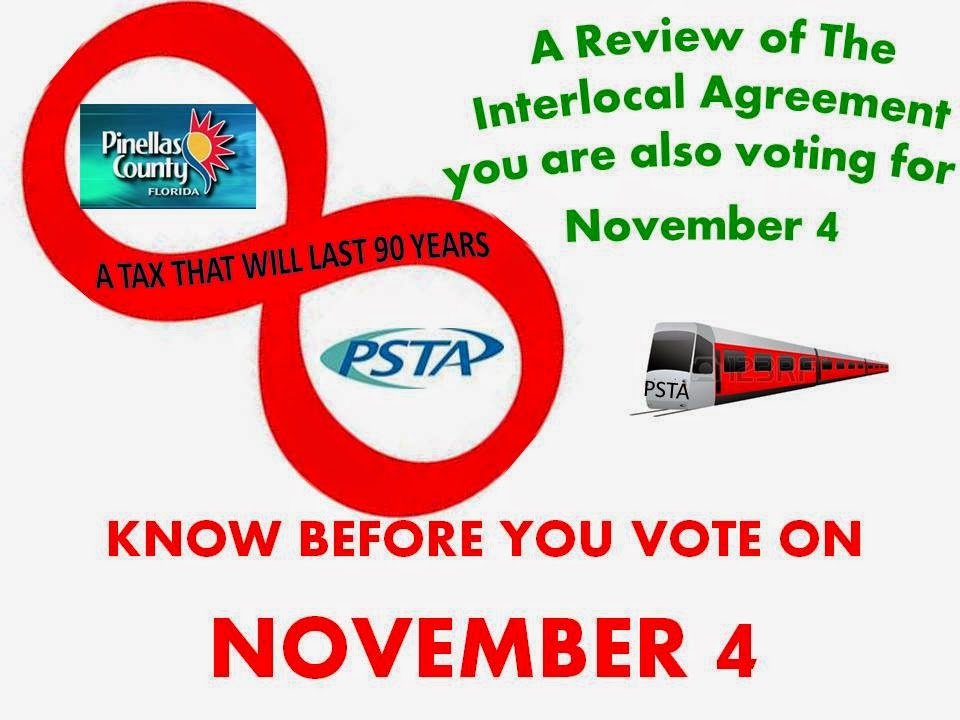 Pinellas County Voters are being asked to approve a law (The GreenLight Plan) that would provide for an open ended 1% increase in the County sales tax.

Due to pressure from opponents of the Greenlight plan and the Sales tax ordinance, the Suncoast Transit Authority and the Pinellas County Commission found it necessary to develop the Interlocal Agreement before the election to add some direction to how the revenue from the 1% sales tax will be spent and to attempt to add some clarity regarding the suspension of the current PSTA Ad valorem property tax.

The text of the Agreement appears in italics     My Comments appear in Bold regular text.

WHEREAS, pursuant to Chapter 2000-424, Laws of Florida, as amended ("Special Act"), PSTA has the authority to plan, develop, improve, construct, maintain, operate, and finance a public transit system, as that term is defined therein; and

WHEREAS, PSTA has developed a plan for the development, improvement, construction, equipping, operation, maintenance and financing of public transit benefitting the County including an expanded bus system with bus rapid transit, increased frequency and extended hours, and local passenger rail and regional connections, which is commonly referred to as the "Greenlight Pinellas Plan;" and

There is a question here as to whether PSTA actually has a detailed plan for each of the items listed in this Whereas. In fact the Ordinance that you will make a law contains no detailed plans and is intentionally vague. This Interlocal Agreement, as you will see does very little to detail the actual PSTA Greenlight plan.

WHEREAS, pursuant to Chapter 163, Florida Statutes, counties, cities, public authorities, and other political subdivisions are authorized to enter into interlocal agreements among and between themselves in order to make the most efficient use of their powers and enabling them to cooperate with other governmental entities; and

Establishes the authority for the Interlocal Agreement.

WHEREAS, the County and PSTA desire to equitably determine and to contract and provide herein the manner in which the proceeds from the Surtax shall be distributed to PSTA and the use to which those proceeds may be made by PSTA.

This is a grand Whereas, and if the Agreement actually accomplished these goals it would be a fine Agreement.

Unfortunately it gets the first part, distributing the money to PSTA, right in line with PSTA goal of "get all the money as fast as you can", while the attempt to control how PSTA will use the money is watered down in legal and political double speak.

NOW, THEREFORE, in consideration of the mutual covenants of this Agreement, and other good and valuable consideration, the receipt of which is hereby acknowledged, the County and PSTA agree, each with the other, as follows:

You see this phrase a lot in agreements of this type.

Most people don't really pay a lot of attention, but in this case you have the most powerful government in the County, the County Commission, and what will quite likely become the second most powerful government entity in the County, PSTA, if this Sales Tax Referendum passes, agreeing "in consideration of the mutual covenants of this Agreement, and other good and valuable consideration, the receipt of which is hereby acknowledged".

What I take from this is these two governments are coveting to use your $130 Million in annual tax revenue for their mutual interests.

I don't see you or me represented here.

Watch My Video Green Light - It's a Bad Law before you vote.