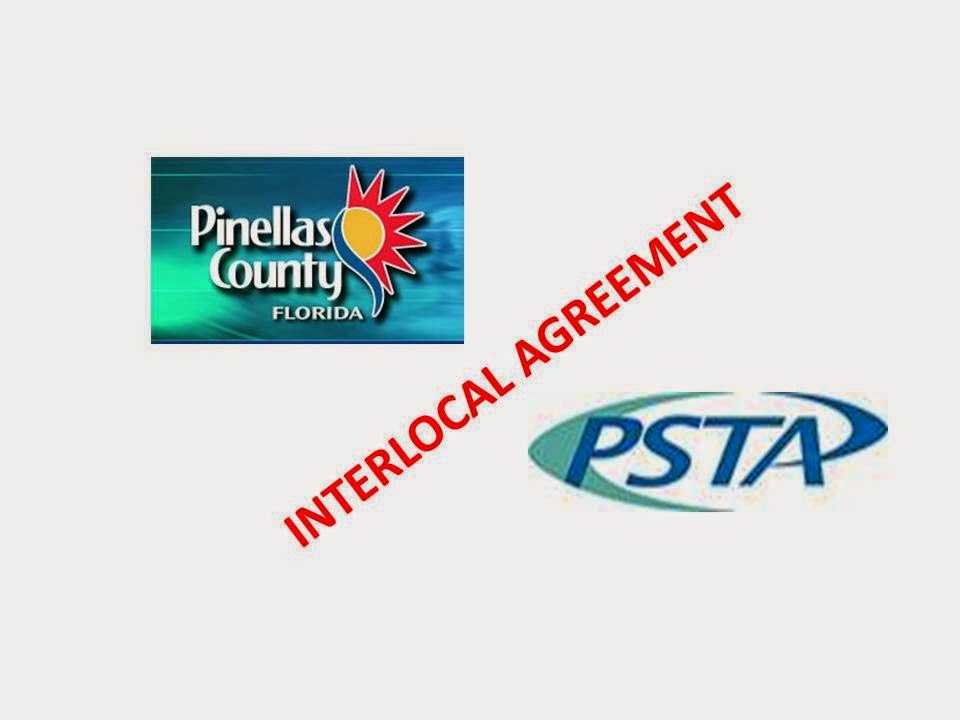 Ordinance 13- 34 which voter are being asked to make a law on November 4, 2014 consists of just
over 4400 words. The Pinellas County/PSTA Interlocal Agreement, where the County attempts to get some control over what is spiraling out of control at the PSTA contains over 7700 words.


The Pinellas County Legal department which let the Original referendum Ordinance, developed solely by PSTA, slide by with virtually no changes, now sees a major problem.
The key fact is this: The Interlocal Agreement it is just that an AGREEMENT. It is NOT a LAW which is what Ordinance 13- 34 will become if approved by the voters.
If approved this AGREEMENT can and will be ignored or modified to suit the interests of those driving this process, and there will be little the taxpayers can do about it.

A review of the Pinellas County PSTA Interlocal Agreement Milestones
Comments in ITALICS.
Below is a preliminary look, with my comments, at the AGREEMENT Milestones as the County Commission tries to shore up the requirements that bus service comes before the train.

EXHIBIT A MILESTONE SCHEDULE
Note that sales tax collection begins January 1 2016. So no buses are to be purchased, yet revenues go up by $100 million. This change will require additional personnel and fleet maintenance. What else is the money being spent on?
Lots of consultants and consultants to manage the consultants and probably significant increases in PSTA Administrative staff and a lot of salary increases.

The sales tax has now been in place for two years and has added an additional $200+ million dollars to PSTA coffers; buses will likely not arrive or be paid for until mid to late 2017. Will these buses be paid for with Sales Tax revenue or will bonds be issues to finance these buses allowing more money for light rail?

This would likely include bust stops, shelters, signage and a lot of consultants, planners and outside engineering firms to plan the street and road changes. Permission from FDOT and interlocal agreements with jurisdictions affected by the BRT/Rapid Bus Service routes will be required (More Consultants).
The sales tax has now been in effect for 3 years and added over $300 million to PSTA revenues
No specific goals or objectives in terms of routes, service or frequencies increases. No measurable metrics in this or any of the milestones. Yet the citizens and visitors will have paid over $300 million.
A the end of 2019 sales tax has now been in effect for 4 years and, if all goes according to plan, almost 1 half a BILLION dollars will have been collected.
This somewhat ambiguous milestone seems to indicate borrowing or issuing bonds (capital procurement)
Lots of consultants, engineers, planners etc in this part of the project
By now PSTA will have collected over $650 million dollars and rapid bus service will just now begin. No estimates of how this money will be spent.
Unlikely that this date will hold given the historical trends in this type of rail construction.