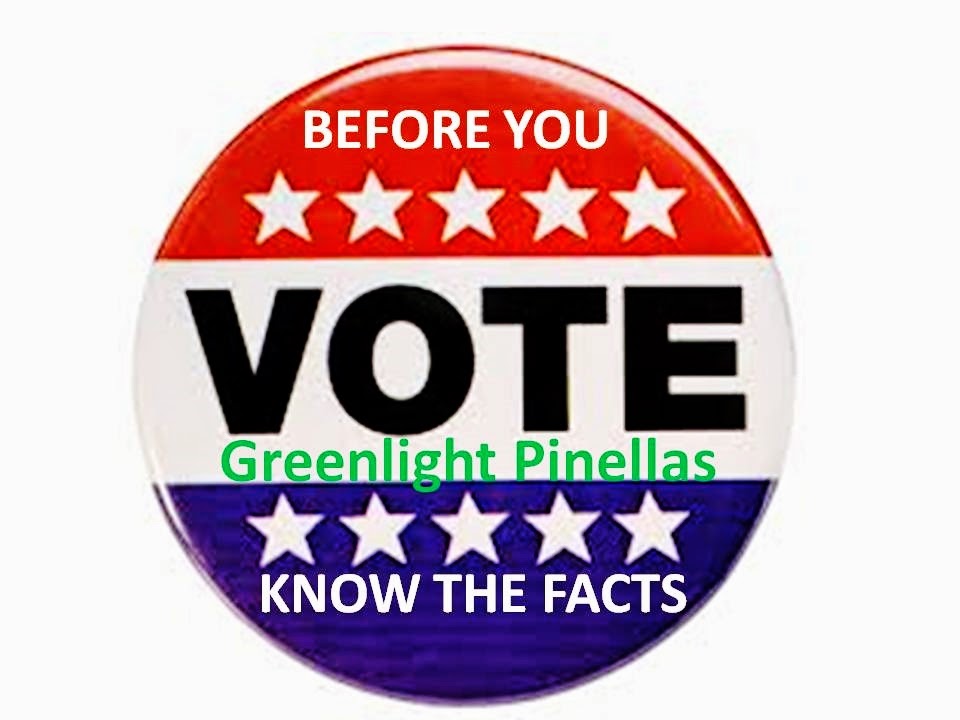 Here is a link to the actual Ordinance (Law) that you are being asked to approve in the sales Tax Referendum: Greenlight Pinellas Tax Ordinance.

The WHEREAS Section:
WHEREAS, Sections 212.054 and 212.055(1), Florida Statutes (the "Acts"), authorize certain counties in Florida, including charter counties, to levy a discretionary sales surtax referred to as the "Charter County and Regional Transportation System Surtax" ("Surtax") subject to elector approval; and

WHEREAS, the Pinellas County Board of County Commissioners ("Board") previously declared its intent in Resolution No. 13-19 to place a referendum question on the November 4, 2014 ballot seeking approval of a levy of up to one percent Surtax to fund countywide transportation projects; and

Note in this WHEREAS the law as provided for by State Statute and established by this Ordinance is constructed to allow a sales sir tax UP TO 1% but in fact the County proposes to levy the entire 1% from day one.

There is no PSTA budget or plan that requires this fourfold increase in PSTA revenue for the very first year of the sales sir tax.

WHEREAS, the Pinellas Suncoast Transit Authority ("PST A"), a transportation authority created by a special act to purchase, own and/or operate transit facilities within Pinellas County, has developed a plan for the improvement, construction, equipping, operation, maintenance and financing of public
transit benefitting Pinellas County, including an expanded bus system with bus rapid transit, increased frequency and extended hours, and local passenger rail and regional connections, commonly referred to as the "Greenlight Pinellas Plan;" and

In fact in the next WHEREAS it becomes clear that the real intent is to fund a bonding effort.

WHEREAS, the revenues generated by the Surtax are needed to fund the costs of public transit and the repayment of any bonds or other obligations or indebtedness which may be incurred for those purposes; and
The real purpose of this sales tax and why it is applied at the full 1% may just begin to unfold here as this WHEREAS begins to lead the revenue generated by Ordinance into the repayment of Bonds or other undefined  indebtedness.

The question is with the PSTA budget at about $40 million and an expected $100 to $130 million in annual sales tax revenue, if the Bus expansion is really the plan, could that not be handled from the additional sales tax revenues without any bonding or borrowing requirements?

There may be many reasons for moving to a bond issue but one of the principal reasons is to tie up as much of the sales tax revenue as possible in a pledge to pay the bond obligation. This one single move could legally lock Pinellas County into the 1% sales sir tax for the life of the bonds, 20 or 30 years. A large portion of the sales tax proceeds going to interest, not to public transportation.

The control of how the bond proceeds would be spent could and probably would be specified in the bond covenants and the money becomes totally out of the Control of the County Commission.

The primary objective of the bonding effort would likely be to assure that the rail proposal of the GreenLight plan gets funded eliminating any future public efforts to stop the rail plan and assuring funds for everything from rail planning to construction.

WHEREAS, it is the intent of the Board to levy the Surtax at a rate of one percent ( 1%) pursuant to the provisions contained in the Acts as provided herein; and

This Section establishes that the Sales Sir tax will be applied at the full 1% ($130 million) rather that gradually applied as State law allows and as the PSTA budget needs actually require additional funding to expand bus service.

Comment
This Ordinance was drafted by the PSTA Legal department and approved with almost no change by the Pinellas County Commission.

Applying a reasonable person test to just this much of the Ordinance should cause you to strongly consider voting NO.

Next Post we will look at the rest of the WHEREAS Section.