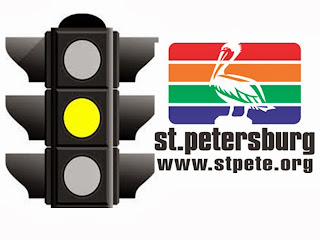 Guest Post by Matt Florell
Note: Before reading this, it would probably be a good idea to take a look at the report I wrote and released on January 6th, 2014 on Short Yellow Signal Times in St. Petersburg.

Summary
This report goes more in depth into the short yellow signal problems in St. Petersburg, FL. Specifically, the topics of faulty traffic signal controllers and the use of the grade of an approach in determining the yellow signal length.

Introduction
In February of 2013, I told City Council about a problem with red light camera citations and videos showing that some lights were not staying yellow long enough. The videos which I had obtained from the city and which I had posted on my website clearly showed the yellow times were what the citations said they were, and not always what the city said they should be. At the time I presented this, City staff seemed to be unaware of the problem and said they would have to look into it. Councilman Gerdes requested a full report
on this and the possibility of raising yellow signal times beyond the minimums throughout the city. It will be over 11 months since the problem was brought up before this report will be given, on January 16th in a PS&I committee meeting.

Faulty controllers, or not?
But, a week earlier, City staff did talk about this issue at the January 9, 2014 City Council meeting. One of the claims made by Director of Traffic and Parking, Joe Kubicki, was that the yellow signal times shown on the red light camera citations and in the associated videos were not accurate, and that they would look into having the yellow time removed from the citations in the future. He said this while defending the accuracy of the city's traffic signaling equipment, and his statement that he was confident that the city has never issued a short yellow citation.

This statement really surprised me. I have reviewed many red light camera citation videos going frame by frame and have confirmed that the yellow time in some of those videos is shorter than the yellow time that the City had set the controllers to. So, that means for Kubicki's statement to be believed, the videos that are being used to prosecute people for red light running in St. Petersburg are inaccurate and would have to be missing time or have missing frames. I have seen no evidence of this, and Kubicki provided no evidence of this. I have submitted a public records request asking for the documents related to their internal investigation that they say shows this, and I am very eager to see what they have to back up these claims.

Another reason this statement really surprised me is that just 6 months earlier, June 20, 2013, both Joe Kubicki and Michael Frederick stood before Council and admitted that there were problems with the consistency of yellow signal times earlier in the red light camera program caused by old and malfunctioning signaling equipment,

"Yes, that happened last fall, November(2012)... We did an exhaustive analysis of all of the timings of every cycle throughout the day. It was an anomaly that didn't occur at every cycle change, it happened at various times of the day" - Michael Frederick

"We believe it was the controllers and we have replaced those." - Joe Kubicki
video link 5:37:00 into the video

Here's a great back-to-back comparison of the two videos put together by Leonard Schmiege
A third reason this statement surprised me is that in May of 2013, the Traffic and Parking Department had requested purchasing of new traffic controller central control software and equipment, because,

"The central system software used to provide synchronization of the City's 299 traffic signals is 20 years old and no longer sustainable", and "The existing control software has been in service for 20 years and is no longer supported due to the original provider ceasing operations."

The first dated signature on this purchase request was from November 2012, exactly the month Michael Frederick claimed that they were first made aware of this short yellow signal problem.
Request for purchase

So, one question is, If they knew about this problem in November 2012, why were they unprepared to offer any kind of explanation three months later when the short yellow signal issue was made public?

Another question is, what happened since the June 20th 2013 City Council meeting that made those previously confirmed faulty timing controllers no longer be faulty?

Since the meeting last week I have contacted the city's red light camera vendor, ATS(American Traffic Solutions), to get their response to Kubicki's claims of inaccurate yellow signal times on citations. This would be a very big problem for red light camera companies like ATS if it was true. That is because if the yellow time on their citations and in the videos is proven to be inaccurate as Kubicki claims, then in states like Georgia, with specific yellow time provisions at red light camera intersections, all of their citations would become unenforceable. ATS did not respond to my repeated requests for their comments on this.

Ignoring the downward slope or grade of an approach
On another related subject, after the discussion in City Council on January 9, 2014 was over, I talked to a Michael Frederick from the Traffic and Parking Department about the other major issue I discovered with short yellow signal times: The City's omission of the downward grade from their yellow time calculations going back at least 2 years, specifically at the Eastbound approach of 1st Avenue S. and 34th Street. Frederick said FDOT directed them to use only a 0% grade when calculating yellow times in St. Petersburg(Some on City Council have also been given this explanation). I told him that I had asked for documented proof of that directive two weeks ago and that the documents I received did not say anything close to that. To which he responded that I should just put in another public records request. So, I did, and I have yet to receive a response.

Later, I spoke with several people at the state and district levels of FDOT(Florida Department of Transportation) and everyone I spoke to said that anything other than a 0% grade should use the ITE formula to calculate yellow times.

State Traffic Systems Engineer Raj Ponnaluri said, "The TEM(Traffic Engineering Manual) is pretty specific and straightforward, if it is not a 0% grade, you have to use the ITE formula to calculate the proper yellow time."

I also contacted the FDOT District 7 head of traffic operations, Gary Thompson, who responded "we would never have directed any agency to ignore the approach grade".

Back during the Jun 20, 2013 City Council meeting, Joe Kubicki stated, "We have a formula that's provided by the Institute of Traffic Engineers(ITE) and a state law that says we use that as a minimum yellow time at our traffic signals"

So my question would be, if a state FDOT District 7 official really did direct the city staff to disregard the approach grade in the ITE formula, and by doing so disregard the law and use a 0% grade at all intersections in St. Petersburg, wouldn't you think the City staff would have documentation of that directive handy as a reason for them breaking the law that Kubicki references?

Some other things Michael Frederick mentioned in our conversation on January 9th, were that most of the roads in St. Petersburg were "built on quicksand" and were constantly sinking, and that a 1.661% downgrade "isn't significant".

Quicksand?
First to the "quicksand" statement, and that the intersections might be just "sinking" very quickly. The Eastbound approach of 1st Ave. S and 34th St. may be sinking, but it didn't happen overnight or even very recently. If you go to that intersection you will see a CVS Pharmacy on the North side of the street very close to the road. On the intersection-facing side of that CVS you will see a concrete walkway in front of the CVS connecting to the sidewalk that runs along 1st Ave. S., and for those two to connect there is a flight of 6 steps going down. On the other side of the CVS the sidewalk connects with no steps, at grade, with the drivethru exit, roughly the same height as the walkway on the other side of the building. You can tell there is an downward grade because on one side of the building there are six steps and the other side of the building is even with the sidewalk. It is visible as you drive through the approach and it is evident by the surroundings of that approach, and it has been that way for years. That CVS Pharmacy and the set of steps were built 6 years ago. Property Appraiser's link

Not significant?
As for the "1.661% downgrade isn't significant" argument. That amount of grade means that the yellow should have been 0.2 seconds longer at that approach. That is not a very long amount of time, but it's been enough to issue 778 red light camera citations at a cost of $158 each. I would argue that those tickets were significant for the hundreds of drivers that received them and wouldn't have if the grade had been a factor in the yellow signal time calculation.

I also asked several officials at FDOT if a grade of only 1% might be considered insignificant and OK to ignore in the yellow time calculation. I was told by every FDOT engineer I talked to that if the grade isn't 0% you have to use the formula, and that any grade other than 0% is not insignificant.

Traffic Engineer Jim Stroz from FDOT District 5 said that he couldn't think of a reason to ever tell a municipality to ignore the grade of an intersection, and added that "we always try to account for a worst case scenario".

Glenn English from FDOT District 2 said "I can't imagine ever telling them(municipalities) to ignore the grade if it's not positive(uphill)."

Steve Shreve from FDOT District 4 even said when calculating their yellow signal times "We always round up the grade to the nearest 0.5%".

Robin Stublen from FDOT District 1 added that "the grade is a very important part of the yellow time calculation".

Elizabeth Jill Wehle from FDOT District 7 stated that they "specifically tell them not to assume an approach is 0%, they need to measure it"

Cliff Johnson, a traffic engineer from FDOT district 3 said "I would consider a 1.66% grade to be significant." Johnson also mentioned that one reason for the all-red phase at an intersection is to compensate for possible miscalculations in the yellow time at an intersection. But, he added that if red light camera enforcement were present, that kind of miscalculation would be "problematic". I should note that up until this point I had never discussed red light cameras with him, he mentioned that on his own.

After all of the research I've done and the conversations I've had, including with FDOT District 7 personnel who are responsible for St. Petersburg, I am left with only one conclusion, that FDOT never directed the St. Petersburg officials to ignore the approach grade when calculating yellow signal times. If that is the case, why are Joe Kubicki and Michael Frederick insisting that's what happened? I have no idea, and we may never find out.