Transparency - No So Much 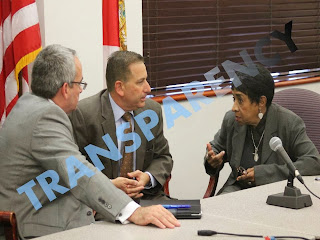 The Kriseman Transition Team is having a problem with their transparency.

On December 9, 2013 I sent the Kriseman media director an e-mail asking where a public records request for the minutes of the Public Safety Committee meetings should be sent.

He responded I should them send to him. I sent a request for minutes from the Public Safety subcommittee.

Later that day the Kriseman media director responded that all Public Records requests should be sent the City Clerk.


On December 11, I sent a formal Public records request to the City Clerk.


In a follow-up telephone call, the Clerk's office indicated that they had no information from the
transition team meetings indicating they were to provide those public records.


A call to Transition Co-Chair Andrew Hayes regarding public records information has not been returned.


On December 12, AM the City Clerk sent an e-mail indicating the request had been forwarded to the Kriseman transition team.


Does this seem like a bit of a circle to you?


So far there has been no response from the transition team.


Here is the new mayors' first introduction to just saying you want something to happen does not make it happen.


Foster never figured out just saying he wanted something done doesn't work in City Hall. Almost everyone has their own agenda and that's what they are pursuing. It is the same thing with this transition team.


Baker on the other hand made sure that everyone knew when he said something it was gospel and if you didn't follow up you would ultimately answer to him.


So Mr. Mayor elect first lesson, just saying everything will be transparent does not make it so.


Did they really take Minutes at these meetings? Will we ever really know?  Only if the new Mayor puts his foot down and right here would be a good place to start.


Get ready to vote "NO" on the Transportation sales tax referendum.