A Not So Casual Conversation with Kevin King 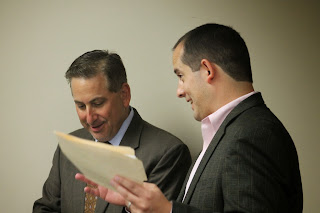 Like most everybody, the last week or so has been a bit hectic. Over the weekend I found a voice Mail from Kevin King, Mayor elect Kriseman's chief of staff designee in the in box.


I got back to Mr. King and it seems he was a bit concerned about my Sunday Post Kriseman and King Will It Work?


Mr. King took exception to my statement he was in the background during the election citing a TV interview for example, but if you follow the coverage, his public appearances were few.


He was also upset by statement he might have a tough time with City staff, indicating that he would only be supervising the small group in the Mayor's office and that since he "had picked them himself" he did not think that would be a problem.


Funny, I thought the Mayor elect picked these people.


After it started to become clear that the call was not going to significantly change my opinions, Mr. King wrapped up the conversation with somewhat stunning close.


"Well", he said, I think I have already wasted too much time on this." He went on, "it's not like it is the Tampa Bay Times, and it's just St. Pete Patch." "And after all you're just a Blogger."


I paused for a moment, and decided I would respond here rather than on the phone. Mr. King is absolutely correct on all counts. It's not the Tampa Bay Times, it is St. Pete Patch or Bay Post Internet and I am just a Blogger.


What is stunning is the overinflated sense of arrogance Mr. King brings to an office he has yet to occupy. At several points in our conversation he referred to the election he and Rick Kriseman had won. I don't remember seeing his name on the Ballot.


I guess the message from the Kriseman inner circle is if you're not powerful and important we don't want to "waste any time on you." And I doubt that view will apply to just Bloggers.


Not what I expected.