Your Candidates Address the Pier Issue 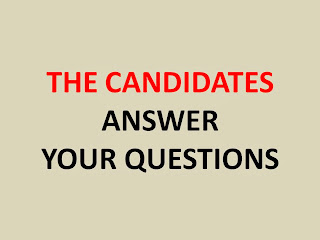 A word of caution: This is a long Post. The responding candidates have taken the time to provide in-depth answers to your questions.


Each candidate was asked five questions taken from submissions from PATCH readers.


Here I bring each candidates answer to a specific question.


Question 3
Should it turn out that the public's desire is to rehab the existing Inverted Pyramid, how will support that effort and how will you proceed?


Mayoral Candidates
Bill Foster: Repeated e-mails to the Foster campaign and a telephone call resulted in NO RESPONSE from the Mayor.


Rick Kriseman:
Should it turn out that the public’s desire is to rehab the existing Inverted Pyramid, how will support that effort and how will you proceed?
I am committed to spending our taxpayer dollars wisely by moving forward with a new structure that will last much longer than a rehabbed one. I believe we can get this right and that the next design will be well-received if it emphasizes function. However, I’ve always strived to have both an open door policy and an open mind and that won’t change on this issue.


District 2
James R. "Jim" Kennedy, Jr.:
Following repeated e-mails there was NO RESPONSE
Lorraine Margeson
Should it turn out that the public's desire is to rehab the existing Inverted Pyramid, how will support that effort and how will you proceed?


Refurbishment IS on the table via the 828 Alliance effort for the next iteration of the pier, and as a councilperson, I would fully support such a decision (or any decision that the people come together on) and do the best I could to make sure it would be a restoration project that would benefit this city. I believe that is entirely possible within current budget allowances.


Carolyn Fries
Should it turn out that the public's desire is to rehab the existing Inverted Pyramid, how will you support that effort and how will you proceed?
Rehab of the inverted pyramid is certainly an option for the new pier if it can be accomplished within budget constraints, but a vote regarding rehab of the inverted pyramid vs. designing a new structure is premature. I recommend a process similar to the one below.


I support the city conducting a Request for Qualification to select an architectural team. As an engineer and technology entrepreneur, I have experience in this area through selection of both industrial (product) designers and custom part manufacturers for my companies. When selecting a supplier, product design requirements are not presented as part of the selection process, but instead the supplier’s qualifications are vetted. What type of work have they done before? Do they have a wide range of experience and capabilities? Have they completed other similar projects? What resources do they have to complete the job? What do references say about the quality of their work? Are project cost and construction time estimations typically accurate?


b) Community Input Regarding Pier Programming


Parallel to architectural team selection, I support an effort to obtain community input regarding program content for both the pier and upland areas. In order to eliminate or significantly reduce the need for subsidies, it is critical that cost be factored in when determining program content.


Based on community input, project cost and other constraints/requirements (code, environmental, etc.), city staff would create a requirements document to provide direction to the architectural team. Again, I have extensive experience in this area as an engineer, having worked with customers, marketing, manufacturing and engineering to develop design requirements for products. One requirement could be that the team must present at least one option for rehab of the inverted pyramid.


Once the requirements document is complete, the architectural team would be paid to prepare and present a number of conceptual designs for consideration.


Conceptual designs would be reviewed by city leaders, staff and the public at large. A summary of public input would be provided to the architectural team to create a final design concept. The summary may recommend elements from different designs be incorporated into the final design (e.g.: Floor plan from one combined with architectural style from another)


The final conceptual design would be put forward for approval by city council. While a referendum may be necessary at some point, extensive public input regarding pier programming and public review of the first round of conceptual designs could eliminate the need.


City staff would complete the project by working with the architectural and construction team to finalize design details and move forward with demolition and construction.


Darden Rice
Should it turn out that the public's desire is to rehab the existing Inverted Pyramid, how will you support that effort and how will you proceed?


It is so clear we have to involve the public in a much more meaningful way as we continue this process.


Based on what I have read so far, rehabbing the Pier does not seem to be a sustainable option for the long term. We cannot continue to provide subsidies to support businesses for whatever iteration of the Pier we will create. If studies show the caissons have an ability to last another 50+ years with a lighter load, then I’d be open to seeing what designs we could possibly work with and put everything on the table for the sake of fair and open discussion.


I support City Hall envisioning its role in this process in a completely different way and working toward a new model for public engagement. We need City Hall to be a better convener, facilitator, enabler, and partner in the process, and thus be willing to move away from the traditional consultation role. By engaging in a more deliberative form of engaging the public, we can start to move away from narrow, confrontational styles that have crippled us.


Karl Nurse
Should it turn out that the public's desire is to rehab the existing Inverted Pyramid, how will you support that effort and how will you proceed?
I believe the city should have a robust outreach system to encourage citizens to tell us what functions they most want in a pier (air conditioned restaurant, splash pad, docks, viewing area, etc) along with our estimated costs for each.  Then, I would share this with the potential architects and allow them to design a new pier or use the existing pier as their design.  Designs should estimate both the building costs and the subsidy required.   We can then share those with the voters to get their opinions.


Amy Foster
Should it turn out that the public's desire is to rehab the existing Inverted Pyramid, how will support that effort and how will you proceed?


I support soliciting significant public input in order to determine the best way forward for St. Pete’s waterfront and the pier. If the majority of our city would like to see the current inverted pyramid rehabbed, I would support this direction if the project can be completed within the allocated resources, without requiring a substantial subsidy that supports private businesses, and includes the functions that the public desires. One of my major concerns is that all models presented reflect the budget we have available so the public can make the most informed decision possible.

Steve Galvin:
Should it turn out that the public’s desire is to rehab the existing Inverted Pyramid, how will you support that effort and how will you proceed?


I would fully support that effort because I believe that it is the most fiscally responsible course of action and based on recent polls, it is the preferred choice of our citizens.  It is well known and documented that the approach to the Pier, as well as the apron around the Pier head, need to be replaced.  It has also been recognized, since core samples were taken and analyzed, that the 4 steel encased “super caissons” supporting the Inverted Pyramid are structurally sound.  So is the steel superstructure of the Inverted Pyramid itself.


Therefore, I would propose that the approach be replaced with one narrower than the current 100’ width in order to keep replacement costs down.  Parking cars the length of the approach as we have been doing creates a huge unnecessary expense when you calculate that 20 feet of approach is needed to park one car.  Not to mention the additional weight load requirements to consider when engineering the new approach design.  I would advocate for an electric/solar “people mover” design, such as that used at theme parks, to ferry folks who can’t or don’t wish to walk to the Pier head.   It would be more energy efficient, greener, and require less space than the trolleys we’ve used in the past.  Since the scope of this project would require it to be FEMA compliant, the original first floor and the 1st floor retail area addition would not be able to include permanent retail space.  One idea would be to remove the 1st floor addition that was added years after the Pyramid was built, which would address the FEMA requirements for that square footage.  All that would be left to comply would be the 1st story of the Pyramid itself.   We could make it open space and allow vendors to operate there like they do at the Saturday morning market.  We could create a vibrant, yet non-permanent, retail experience in that way, selling fresh fish, produce, flowers, and baked goods like they do at many municipal piers throughout the country such as Pike’s Market in Seattle or Fisherman’s Wharf in San Francisco.  This would also allow our downtown residents a broad selection of fresh fare that should entice more of them to utilize that Pier more frequently for food shopping.


As the Inverted Pyramid was originally engineered to be 2 stories taller than it currently is, we could add an additional top floor that would recoup the lost retail square footage from the first floor. Now that the Aquarium is no longer on the Pier, that massive weight load (water) and heat load (metal halide lighting) is no longer creating an excessive drain on the electrical and HVAC resources of the structure.  I would encourage incorporating a significant solar element in the refurbished design to honor our commitment to being a “green” city and save on the expense of air conditioning the structure.


I would like to see the City’s Downtown Development staff be active in soliciting at least one nationally known restaurant that fits in with a waterfront location to occupy space in the Pyramid, such as a Margaritaville or a Legal Seafood.  Having a nationally known restaurant attracts more diners and tourists view it as a safe choice.  Since the wait for tables is often long, the surrounding, independently owned restaurants will benefit from the overflow of diners not wanting to wait for a table.  We have many great restaurants along Beach Drive, but some family friendly, reasonably priced options are also needed and the Pier is a good place for them.


Most importantly, the public needs to be brought into the conversation and given a voice and a choice on how our municipal Pier will look and operate for the next 50 years.  I will proceed by insisting that the public be kept fully informed on what the options are and how much the project will cost the taxpayers.  A decision as important as this should not be made by a handful of people or non-residents.