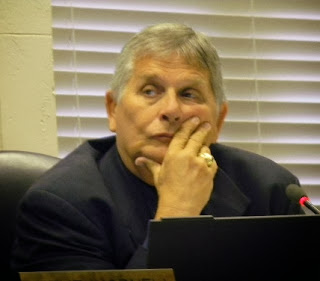 In a somewhat surprising move City Council Member Bill Dudley has announced his support for Mayor Bill Foster including a $100 donation to Foster's campaign.

Given Dudley's lackluster performance and rambling comments as a City Council member I'm not sure how much positive impact Dudley's announcement will have with just 6 days or so before the election.
Dudley's passion for red light cameras, fondness for the LENS and general failure to stand up for the public's right to be heard certainly puts him in the Foster camp.
One would have thought that having waited this long and with the polls showing Kriseman with a substantial lead, Dudley would have just set this one out rather than risking being in direct opposition to the new Mayor.
But then Bill Dudley's sense of timing has never been real good.
Be sure to comment below or you can e-mail Doc at: dr.webb@verizon.net, or send me a Facebook Friend request.
Campaign Disclosures: Contributor to Kathleen Ford Campaign, Darden Rice Campaign, Concern Citizens of St. Petersburg, Rick Kriseman for Mayor, District 2 Lorraine Margeson