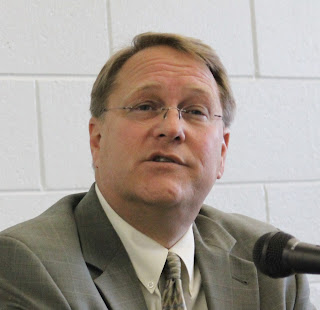 Bill Foster must be feeling a lot like general Custer these days as he heads to City Council meetings.


Once you get beyond the somewhat humorous prospect of the majority of the City Council not supporting the Mayor and being willing to publicly endorse his opponent, you should probably ask yourself the question: why such disharmony at City Hall?


The answers are really pretty simple.


Bill Foster is not a leader in any way shape or form. Pick a subject, pick an issue and you will likely find Bill Foster on both sides at one point or another. Foster has brought a whole new meaning to the term 'flip flopping".


I don't think anybody on City Council, or the City staff for that matter, trusts Bill Foster. Council members like confidence  in the Mayor, trust he will have solid positions and will follow through on key issues.


Foster's often snide and snarky remarks during meetings show a complete lack of respect and his platitudes and smiles merely make it worse.


Being self serving is not a new trait in Mayors, Rick Baker was generally self serving, but for the most part you could trust Baker to do what he said and when he made a deal with Council members he stuck with it.


With Foster, the movers and shakers are never really sure which way he will go. Usually it's both ways and it is always in the direction that benefits Bill Foster at the moment.


I don't see how the public can have any trust in a Mayor that will snuggle up to the arts community in one breath and throw them under the bus in the next, ignore the Pier Task force, support and then decry the LENS, proclaim the desire to have public input on critical issues and then decide to ignore the results of his own 828 Alliance, when those results don't meet his criteria.


If Bill Foster is re-elected the results of the Waterfront Master Plan will be something just short of mush, and you can bet Bill Foster will be ignoring them before the ink is dry.


Foster can polish up the stump speech and the canned answers on the campaign trail, but when he sits back down in the Mayors' Chair he is still the same untrustworthy, lack luster, flip flopping  leader he has always been, and re-election will not change that, if anything he will see it as a mandate for more of the same.


Things didn't turn out to well, for General Custer, we will see how Bill Foster fares as the number of key supporters for Rick Kriseman grows.