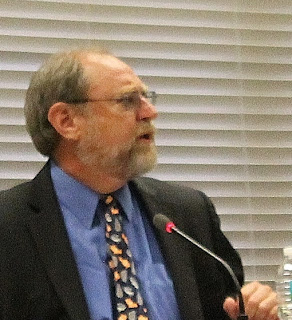 Thursday's Pier/LENS discussion went about as to be expected. Those against, those for, City staff propping up an ever flawed initial design, and a frustrated City Council after  staff dropped a 400 page technical report on City Council members door steps Friday.

All Council members complained to one degree or another about a lack of time to fully digest the information.
Buoyed by the latest polling numbers, opponents once again begged City Council to not close the Pier a point that Council never did address officially.
Those in favor continue to deny the public is upset, the people want to vote and the fact that they even should have a vote.
Pretty much status quos. Until....
Right in the middle of the Council discussion Council member Jim Kennedy presented a motion to delay the vote for two weeks so Council could get some additional information from staff.
There was a long pause then Councilman Gerdes seconded the motion "for discussion purposes", he said.
The interesting point is by delaying for two weeks, the Stop the LENS petitions which are being held so a vote can occur on the primary ballot, avoiding a special election, will, in all likelihood, be submitted and possibly even certified before the Council next takes up the issue.
Once the Stop The Lens petitions are submitted and possibly certified, the likes of Dudley, Kornell, Gerdes and Kennedy will all have some political cover for voting to deny the second round of  funding, at least until after the primary vote.
After some discussion, some of which was a bit heated, City Legal informed Council that it could not make substitute motions until Kennedy's motion was voted on and City Council then voted to delay for the two weeks, essentially ending the formal discussion about approving the next round of funding.
So in one move Kennedy, essentially stopped the funding vote, delayed the process until the referendum picture is clearer and set the stage to use the referendum as an excuse to not go forward at least with all of the $1.5 Million dollars or so in funding all in the name of getting more information.
Not bad for one motion.
Curious or clever I'll leave that up to you, but I would like to see some serious competition in the District 2 race.
e-mail Doc at: dr.webb@verizon.net, or send me a Facebook Friend request.