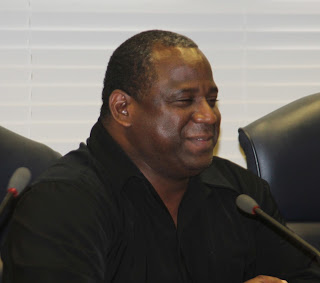 In my 28 plus years with the City I cannot remember a scene reflecting such blatant disregard for the public's views and feelings as these two meetings.
The LENS Review meeting was nothing short of a set up, and every attempt from the outset was to attack and belittle the public and those who came to speak to the issue. It was Mike Connors at his best until Bud Risser and his team called him out.
I hadn't really thought of the LENS as a road sign, but the maybe "Dangerous Curve" would be appropriate.
There is however a greater dynamic at work.
I'll willingly concede Wengay Newton needs to calm down, shorten his answers and follow parliamentary rules. He makes a lot of his own problems. But he is also frustrated.
What is disconcerting is the condescending way he is treated by everyone on the dais. From Kennedy's snide remarks, Dudley's snorts, Gerde's attempts to be clever, Nurse's side comments, Kornell's scrunched up face, Curran's efforts to be cute and Danner's open disgust, it is downright ugly.
Add to it Mayor Fosters' complete inability or desire to deal with Newton on any level and you probably have an insight into why not much is happening on the South Side.
Let's take it as a given all you folks on City Council and the Mayor are smarter, better educated and more successful than Wengay, that you can say more with fewer words than he can, your sentence structure is more pleasing to your ears than his and you probably make more money than he does.
But there is one thing that you don't have over Wengay, you were all elected by the same  citizens of St. Petersburg and he deserves your respect as an elected official just like each and every other elected member of City Council and the Mayor.
Right now the City Council is looking more like a bigots convention than it is a governing body.
The crowning moment of political absurdity came when after almost and hour and a half of public pleading and five hours of waiting, Newton's new business item to simply put the closing of the Pier on hold came up and not one of you so called public servants would second it so there could at least be a discussion.
Why?
Legal got you scared?
So you would have not to go on the record and vote?
Or is this just your way of trying to make Wengay look bad? Seems a bit petty to me.
The only people who looked bad are you who would not appropriately dispatch your responsibility as elected representatives of the citizens of St. Petersburg and consider a fellow Council member's motion.
Over 40,000 petitions, 400 jobs, 25 businesses, shuttering and destruction of a City asset that still attracts visitors, what does it take to get your attention?
I don't know about you, but I would see no reason to reelect any of the obstinate seven currently sitting on City Council or the Mayor.
e-mail Doc at: dr.webb@verizon.net, or send me a Facebook Friend request.