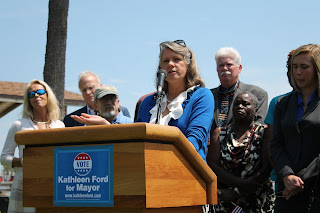 Kathleen Fords' decision to run a third time for St. Pete Mayor was announced quietly to few supporters who gathered at Demons Landing for the Monday announcement.

She is in the race now and things have really changed.
Kriseman, who was setting back and letting Foster gradually self destruct, must now come out and take some firm positions on the Pier, the Rays and the budget to name a few. Throw in the Police Department that desperately needs a new Chief, a demoralized Fire department and Rick needs to get on some specific talking points and he needs to get to them quickly.
Ford is already on all these issues armed with a basket full of facts and ideas.
Kriseman, who has spent the last few years in Tallahassee playing politician where politically correct is in, dealing straight up is out, told me  (A Casual Conversation With Rick Kriseman) one of the reasons he did not run for re-election to the Legislature was the Tallahassee politics. His City Hall steps announcement speech was all Tallahassee political double speak.
Well Rick,  here's your chance to get in the real game and is going to have to be quick.
All of that out of town money may also become an issue. Those folks don't usually donate just for the fun of it.
Kriseman can wait for Ford to explode, but I wouldn't count on that this time.
Bill Foster may find himself feeling like the kid watching the ball game through a knothole in the outfield fence. It would appear that a growing number of people neither want to hear or care what the current Mayor says or thinks about anything.
Foster is responsible for the Pier debacle, the current state of relations with the Rays and the County. He has done little with South St. Pete and his support for neighborhoods has been abysmal.
Staff morale is low enough to walk under a snake. He has played politics with the cops and the firefighters and he simply needs to go.
I am pretty sure there is a secret campaign plan.
The still un-played card in the hand is Rick Baker. I am not sure what Rick Baker is doing for Bill Edwards, but he can probably do it in a full body cast. The former Mayor needs a new challenge.
In my Post A Casual Conversation with Rick Baker, there is a quote in the next to last line you should read.
Is this that moment? Are these the "conditions"? We may not know for a while since candidates have until the end of June to file and raising money would simply not be an issue for Baker. He may wait and see how things unfold.
Baker would not be thrilled with Kriseman as Mayor, possibly not concerned enough to run again, but if Foster continues to weaken and it looks like Ford may win the primary then the former Mayor has some serious soul searching to do.
Note: Beginning with this Post  in the interest of full disclosure I will list in the last tag line the local campaigns in which I am directly involved and the nature of my participation.
e-mail Doc at: dr.webb@verizon.net, or send me a Facebook Friend request.
Campaign Disclosures: Contributor to the Darden Rice Campaign