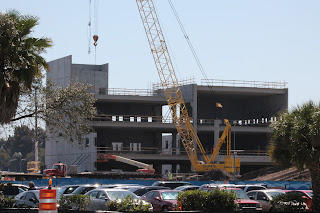 Thompson points out that you if you have a Police emergency, you have to tell your story twice  first to the County call taker, then to the local dispatcher. Actually in St. Pete in most cases you have to tell it three times, once to the County 911 call taker, then to the St. Petersburg call taker and at least part if not all of your need a third time to the St. Pete Police dispatcher. All the time vital seconds are going by.
The St. Petersburg Police Communications center is an expensive and redundant carry over from the last century. With a staff of nearly 100 including workers, supervisors and managers, the annual budget approaches $10 million.
Currently under Construction at the Sheriffs complex, far away from any potential flooding, is a new state of the art, hurricane hardened facility conceived and designed to provide emergency dispatch  and communications services for entire County.
The new St. Petersburg Police building contains and extensive section for the current 911 call center requiring millions of dollars of highly technical infrastructure which duplicates what is now under construction at the Sheriffs facility.
I have suggested on several occasions that City Council request or demand a detailed report indicating what portion of the $50 to $60 million for the Police complex is related to building the communications center. So far Council has not asked, the Mayor has not volunteered and the Police department has been mum on the issue.
So having been there for five years providing IT service to the Communications center I'll hazard a guess of $8 to $10 million dollars if no stand by facility is included.
The argument a backup or standby center would still be required is just not valid when you look at the redundancy built into the Sheriffs new facility.
Add to that the annual operating cost savings from eliminating the communications center, less whatever the Sheriff might charge for the service, and you also have significant operating budget impact.
It is time Council asked for and get the information.
While I was IT manager for the St. Pete PD the subject of any consolidation was completely off the table. Even simple network connectivity for information sharing was difficult to get approved. The issue? Rampant paranoia that the Sheriff would swoop in and take over the PD.
You are going to see a lot of stonewalling from PD management, and a lot the "we know the City better than the County", never mind the fact that all fire and emergency medical dispatch for the entire County is now handled by the County's existing 911 center.
The technical problems are easily overcome and the Police Departments Computer aided Dispatch system and Records system will soon need a major upgrade.
City Council will have to push this issue. The Police Chief is unlikely to drive the issue, the Mayor needs the PD and those votes in the Communications center for the election.
City Council, it's up to you to ask the questions and get the answers.
e-mail Doc at: dr.webb@verizon.net, or send me a Facebook Friend request.