Where Have All the Candidates Gone?... Long Time Passing... 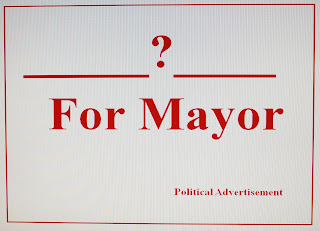 If that sounds a little familiar say it slowly then hum the tune.

It was not long ago that the St. Pete Mayor's candidate pool looked pretty full. There was Scott Wagman, Ken Welch, Herb Polson, Kathleen Ford, Jeff Danner, Leslie Curran, Wengay Newton, Rick Baker, Rick Kriseman and of course the Mayor, Bill Foster.
To date  Anthony  Cates,  Paul Congemi, Rick Kriseman and Bill Foster have formally announced their candidacy.
So what happened?
If you look at the list above, all of these folks are pretty familiar with the City and how it runs. They know the challenges and the commitment it takes to do the Mayor's job right and what it would take to mount a successful campaign.
Looking at the issues: a $3 million dollar budget deficit, the Pier, the Lens and its financing, The new Police Building, a Police Department desperately in need of new leadership, a deteriorating infrastructure of road, waste water and potable water systems, you have to really appreciate a challenge to throw your hat into the ring.
Including capital expenditures, the City is a nearly $500 million dollar a year business, with over 250,000 very vocal customers and over 2500 employees.
The Mayor is the Mayor, dealing with political issues, but he or she is also the CEO of one of the County's largest employers and businesses.
Bill Foster has been quoted recently as saying he is working 12 hours a day running the City and hasn't had time to start campaigning. Some might poo poo that, but I can tell you from watching the last two or three mayors up close, he is not exaggerating the time commitment.
The job takes a pretty big toll on the Mayor's personal career, and his or her family. It pays just north of $120K. Not really that much given the responsibility.
For some strange reason, being Mayor of St. Pete has not been much of a career path builder in politics. Most of the recent St. Pete Mayors have returned to private life and tried to rebuild their careers or businesses.
It used to be running for Mayor of any city was an ego trip. A way to "be somebody". Today in most cities, St. Pete included, it is a ticket to a four year nightmare of work and responsibility often with little thanks.
Given that bright picture of the job, is anyone else likely to throw their hat into the ring?

It depends. There are some viable candidates who have not said they won't run.
If Rick Kriseman would come out with firm positions on stopping the LENS, a new Pier process, building the new Police building, restructuring the Police Department, a program to once again focus on South St. Pete issues, and a firm position on rebuilding the neighborhood structure from the David Fisher days,  he might keep one or two potentially strong candidates from jumping in. Not just flowery stuff,  real promises and commitments.
Rick might be able to turn it into  essentially a two man primary which would also be a referendum on some of the City's major issues.
If you go back to the list above, there are some political powerhouses that have not yet been formally heard from. Time is growing short, look for some action, very soon.
e-mail Doc at: dr.webb@verizon.net, or send me a Facebook Friend request.