The Deputy City Attorney and the Red Light Cameras 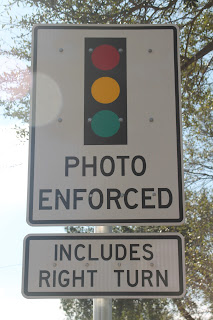 It is real easy to take some shots at Mark Winn regarding his two challenges to a couple of right on red light camera citations.

Could be that the reason he got both citations is because he IS the deputy City Attorney and giving him a pass, even though the circumstances are pretty clear, would have presented even more of an uproar.
On the surface it might seem that the Deputy City attorney has and inside track, that is unlikely, but this episode does begin to peel back the onion of the whole red light camera issue.
The first point is the simple fact that a City official sees the system of enforcement as flawed enough to actually mount a legal challenge.
Agreed that $158 bucks is not a small amount of money, but Mark Winn is pretty well paid, and even with two, he had to know that sooner or later the whole issue of him beating the rap  is going to go public.
It would have been simpler to just pay the money and move on. I doubt seriously that the issue would have even  made the news other than perhaps as a side note.
The question is why? and Only Mark Winn knows for sure. After working with Mark for over 20 years, including some pretty thorny issues, what I know is: he is one smart attorney.
What this whole issue has done is shine a very bright light on how arbitrary the red light camera citation process is and how easy it is to get the ticket over turned  if, (1) you know the system, and (2) have the time to make the court appearance.
The right on red citation is the biggest revenue generator.  Thursday's City council mini debate was more theater than substance.
The continued hyping of red light cameras as a great traffic safety tool continues to fall victim to the facts.
Most surprising vote to retain the cameras was by Karl Nurse. I was surprised Karl did not side with the public on this issue.
Dudley and Kennedy's reaction not too surprising, Kennedy has no concern about the public being ripped off and Dudley, who touts his experience in drivers education experience as providing some kind authoritative credentials, is clueless as usual.
Kennedy who is up for reelection in no way deserves to be returned to City Council.
Danner's insensitivity to the public's feelings about the issue is likely just the beginning of the sour grapes he will offer up as he term limits out and has to look for a real job. After all he really doesn't need your vote any more.
Gerdes continues to disappoint. For someone who has an eye on the Mayor's spot down the road he should be taking more of a leadership role instead of pandering to the status quo and tossing the ball to the Mayor.
And the Mayor, speaking of people who should not be reelected,  he gets some kudos for halting the tickets of those car owners who were allegedly not driving at the time of the infraction, but in the end the Mayor never met a revenue flow that picks your pocket he didn't like and he's not likely to kill the program as long as the checks keep coming.
As for Mark Winn, if I were the Mayor and my Deputy City attorney feels strongly enough about how the program is being administered to go to court twice to challenge the program, I would think seriously about making some changes, like dropping the right on red enforcement completely.
Not likely to happen, first ATS would strongly object (loss of revenue) and they might threaten to pull their cameras. After all this is all about the money. Second, eliminating right on red citations would also hit the City's cash flow and no matter how much they posture, it's still all about the money.
Remember to keep your foot on the brake when you go right on red, it may just be your pass on a $158 dollar ticket.
e-mail Doc at: dr.webb@verizon.net, or send me a Facebook Friend request.