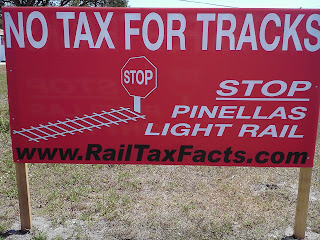 Everyone is all in a flutter about a recent poll that shows a growing sentiment for light rail in the Bay area.


On the surface light rail seems like such a good idea. Get on the train and smoothly and effortlessly get where you are going. No cranky motorists or maddening red lights, it all seems so wonderful.


It rarely works that way, unless you live right next to the light rail station, and where you are going is close to a rail station.
Fact is few of us will live next to a light rail stop, even fewer of us would want to, and the probability that where you want to go, especially in Pinellas County, being within even a reasonable walking distance of the light rail station is very low.
All of the beautiful pictures of futuristic trains and idyllic views of smiling riders can lull you into a false sense of feeling light rail is the answer.


For most of us it will be either a bus ride or a car trip or bike ride to the light rail station and then a hike, cab, trolley or bus ride to our final destination. Reverse that process including dragging all those packages to get home. Going to the grocery store becomes a four hour trip with multiple fares verses a quick drive.


You're going to hear the word "intermodal" a lot in these light rail discussions, that's light rail speak, for "we have to hang a lot of crap around this thing to make it work".


Things like busses, cabs, trolleys and other forms of transportation to actually get riders to where they want to go. All very expensive, generally inconvenient and not self supporting from a revenue perspective. Once in place the flow of tax payer money to subsidize light rail will only grow.


Could light rail really work in Pinellas County. Maybe. But the people who push it the most are those who will benefit the most: those selling the train systems, building the tracks and acquiring the right of way.


When you get down to the facts, the cost of acquiring right of way, building the system, operating and subsidizing it and all of light rail's supporting infrastructure in Pinellas county will be as staggering as will the tax bill that goes with it.


Next time they poll the light rail issue the question should probably be would you support an increase in your property tax or sales tax to build a light rail system? The results might change a little.

Have your say. Be sure to get a petition for the Pier Referendum and complete it properly. Information and schedule of events at Stop The Lens.