I Was Blind But Now I See 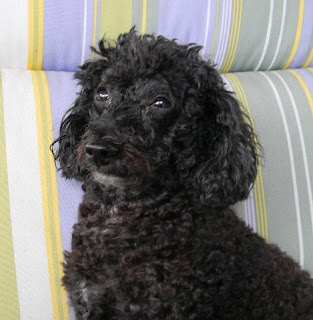 Max had a pretty good summer and fall his 5th year, but it was clear his vision was failing rapidly. Less willing to play, unable at times to find his favorite toy, Max became a bit more lethargic, but still managed to come in and wake us up every morning with the squeaky ball.

Although there were days I had to find it for him.
Dogs do compensate as they lose their vision, and Max would always place the ball in a spot where he could remember where it was as time went on.
A follow up visit to Blue Pear Veterinary Partners on Ulmerton Road, the second clinic I had visited, provided the expected diagnosis: Max was virtually blind in one eye and the other had gotten much worse.
It was fascinating and heartbreaking to watch as Max compensated for his decline in vision, still happy, loving and willing to play he was doing  well but by fall he was struggling.
His playmate Harley, our other dog, seemed to take note and was a bit protective.
The information that Dr. Stengard, from Blue Pearl, had supplied was very detailed. Cataract surgery in canines is very similar to cataract surgery in humans, with one major difference. Just as in humans, the restoration of vision is virtually immediate, but canines cannot take care of the post operation medication and eye drops.
You the pet owner play a major role in the total success of the surgery and its long term out come. And it is no small role. In the Picture are just a few of the drugs and eye drops, administered 17 times each day no closer than 10 minutes apart for the first 7 to 10 days.
Theresa and I had a pretty busy travel schedule through October and November so we set the date for surgery on both eyes for early in December.
Max went in the Clinic at 8:00AM December 10, and I picked him up at 4:30PM. He could spend the night at home, but had to be back at 8:00AM the next day for a follow up. Pressure in the eye is the major concern.
Max was excited when I got there at 4:30, the only outward indication of his experience was small bandage on a front paw where the IV had been and some shaving around the eyes. I left with Max and  a huge bag of pills, drops and medications.
I took him out to the truck, his favorite of all our vehicles, set him in the front seat and climbed in on the driver's side.
He sat there in the seat looking intently at me. It was like he wanted to say something. The gaze was intense. He climbed up on the console and licked my face all over, then sat back down looked out the windshield as if to say "let's go home". Needless to say, it took a couple of minutes for me to regain some composure and drive home.
Once home Max was confined to a cage, since there were stitches in the cornea which would dissolve and stitches at the corner of the eyelids which would be removed. He needed some down time with little activity.
Dr. Stengard and the staff had indicated that Max could see very well now but that his vision would improve over the next few days. They also said that he would spend some time readjusting to visual images as clues and motivators, since he had been using other sensory means to arrive at  these same reactions.
In my final Post of this series on Friday I'll tell you a bit about Max's reactions to being able to see, post op care, and how Max is doing.
If you missed the first post of this thee part series, you can see "Going Blind" by clicking here
e-mail Doc at: dr.webb@verizon.net, or send me a Facebook Friend request.